Today was a really good day – things went really smoothly and we successfully acquired a lot of good data without any glitches.   The flights today were over the Everglades and the Florida keys. It was very scenic, and I wanted to get some pictures out the window but I was really busy with the instrument so I didn’t get a chance to get to the camera!

We flew over the Everglades yesterday, too.  Both days we had clear sky in the early morning, so the conditions were ideal for both SIMPL and CAR.  They made their measurements almost all morning, from 8 am – 11 am and were very happy with the outcome.  DBSAR did fine today – no problems at all.    It was a very successful two days for all the instruments. 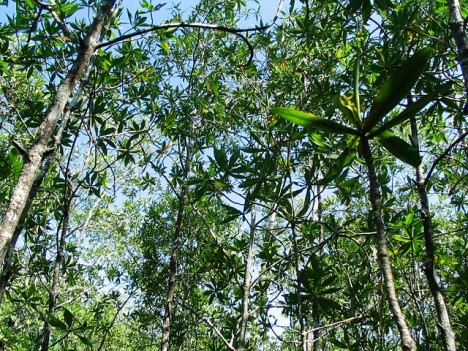 This campaign to Florida has been the best for DBSAR and SIMPL as well.  We have been able to collect a really great data set from both of the instruments.  When we analyze the data, we should be able to put the data from the two instruments together to make some very good science.   We have a lot of data to analyze and I’m looking forward to it.

Besides collecting a lot of data, we have learned an awful lot about the instruments in this campaign.  We learned what the issues are and how to fix them.  We are getting better with every flight, and it’s very satisfying.

Yesterday DBSAR ran an excellent campaign, with only very minor computer glitches and then only at the very end.  Just when we were almost done yesterday, the RAID began to have a few hiccups.  But I think I understand the problem fully now.  It’s just that when the RAID fills up, it can’t run well and we start dropping data.

Originally we started with different type of RAID.  At first the original RAID would lose a whole lot of data due to vibration. So when we started to fly, we’d get a lot of vibration, and then we’d lose the RAID, and when you lose the RAID, you can’t catch the data.

When we are collecting data, that data is coming in really, really fast and we need that RAID – a computer alone just can’t handle that much data coming in that fast.  So when we saw the problems with vibration in the first flights, we went out and bought a new hard drive and configured a brand new RAID.  It did pretty well – it would run for quite awhile but still have had some trouble as it filled up.

Because vibration was a problem in our first flights, when we had some downtime last week, we took the time to move the computer rack to a different part of the plane, so that we could minimize vibration.  We did that – and it has helped tremendously.  We can run the DBSAR for several hours with no problems at all.  This new RAID is a whole lot better that the first one, but still, it will eventually fill up.  When it does, then we start getting similar symptoms and can end up with some data losses.

But even though we still have some hiccups in the instrument under some extreme conditions, this campaign has allowed me to understand it better.  So I know how to acquire data with the new raid without losing any data at all.  Basically, I have a good idea how long the instrument will perform perfectly, so we can constrain our data collection to that amount of time.  After that, we stop and empty the RAID completely and it will be ready to go again.  We know now how to keep data collection to an optimum, and it’s great to know that.

We do have an upper limit to how much we can collect without problems.  That’s not unusual and what’s most important is to know that upper limit.  We know it now – it’s over 500 gigabytes, and that’s a whole lot of data.   To get an idea of how much data that is, let me just say that it takes me about 10 hours just to download all of that data from the flight computer into a backup storage system.   It’s a lot of data.

I want to mention that we have a new team member on this flight.  He’s new to the flight campaign, but has worked with me at Goddard on this instrument for a long time.  His name is Steve Suefert and he’s a technician here at our branch, working in the anechoic chamber where we calibrate the instrument before we fly, so he really knows the DBSAR very well.  We weren’t expecting to fly this week, so not everyone could come along.  Steve was willing to fill in when other people couldn’t come.  Having him here has been great – he’s been a big help and the work has gone much faster than if I was trying to do this alone. 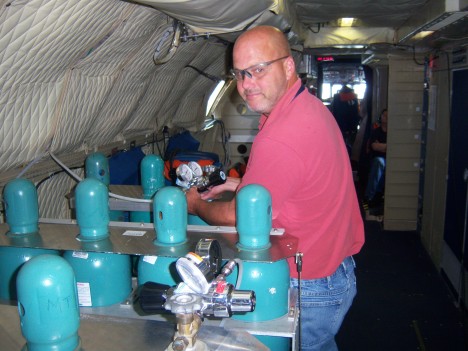 I’m sending a picture of him, and in that picture you see him standing near several gas tanks.  They hold compressed nitrogen.  We use compressed nitrogen to cool the instrument. We pump it through some specialized tubes, vortex tubes, to cool the air inside the radar.  Also we use nitrogen to purge the system as we descend.  When we fly, the air at high altitudes is very cold.  When we descend the cold metal of the instrument comes in contact with the warm air at lower altitudes.  The air is moist, so the temperature change means that condensation will form on the enclosed surfaces of the radar.  You can imagine that condensation – water – isn’t very good for electronics at all, it can really mess it up.  But we can stop the condensation from forming.  The compressed nitrogen is very dry, so when we descend, we pour a lot of it into the system.  By pouring in this very dry gas, we can keep the instrument dry.  So we do that every time we descend.

Our plan had been to fly locally near Wallops tomorrow, because the weather isn’t going to be very good in Florida or in Pennsylvania.  Also, the weather around Howland and Bartlett forests won’t be good – rain and clouds are forecast.  We still have 14 hours of flight time and we want to use it.  And we can gather good data at several sites near Wallops.  So a day local to Wallops would be wonderful.

With that in mind, we transited from Florida to Wallops, finished our flights and after gathering what we needed from the airplane and shutting down the mission for the day, we headed out to our hotel room. When we arrived at the hotel, we heard new that changed everything.  The flight crew from Wallops had called, and left a message that the aircraft had a problem.  And that means we can’t fly tomorrow.

We have been told that the problem is small, and it’s not going to scrub our whole mission.  But tomorrow they need to work on it.  They are sure that the problem will be fixed by Friday, and we can leave then.

We only have the plane until Friday as it stands now.  They tell us, however, that they may be able to extend the flight time until Saturday, to try to allow us to use our full 14 hours of air time.  We’ll see what we can do.  We need to fly, but Saturday means a lot of additional costs, with overtime and all of that.  We’ll see.  Another option might be to fly Monday.  As it stands now, we have to de-install everything on Monday, so we can’t fly.  But Wallops is saying they may be able to work with us to try to allow us to use our hours.

Since we aren’t flying tomorrow, I’m heading back to Goddard now.   I have a lot of work to do and can use some time in the office.  I also have to download the date from the RAID tonight.  It takes about ten hours to download the data, but I can just start it and let it run all night.

We will have a teleconference at 2 p.m. tomorrow, and we’ll find out if we can go Friday.  And if we can go, then I will leave from Goddard and drive back out to Wallops tomorrow afternoon and get ready for the flight.   If we fly Friday, it will be a super long day in the air, to use all the hours we can and gather as much data as possible.  Then we have to drive back home, so everyone will be working a 12- 14 hour day.  This field campaign is really a lot of work, but that’s just the way they are.  This one has paid off very well – we’re getting all of this excellent data and all of the experience with the instruments – it’s been really great.

This entry was posted on Wednesday, September 14th, 2011 at 12:49 pm and is filed under Eco3D: Exploring the Third Dimension of Forest Carbon. You can follow any responses to this entry through the RSS 2.0 feed. Both comments and pings are currently closed.