I’m pretty busy tonight, even though it’s already late.  I’m in the hotel room after a long day, and I have had to bring the computer from the P3 to the room to do some trouble shooting tonight.   I’ll be working very late again, it looks like, but that happens on these field campaigns a lot of the time.

We had a beautiful day for the flight, but unfortunately we had some trouble today.  The DBSAR RAID is not keeping up with all the data that comes in.  We know what is wrong, and I believe I can get it ready for tomorrow if I work on it tonight – and that’s what I’m doing now.  We’ll be ready to go in the morning.

We were able to collect data from the DBSAR, but it kept me very, very busy trying to fix it when it would crash as it was collecting data.  I think we have some good data, but how much the data was affected by the file problem, I’m not sure.  I’ll know after I get a chance to look at some of the data, probably later tonight.

Basically the problem is that the RAID has too many files on the discs now.  The more files on the disc, the longer it takes for a computer to write to it.  The answer is to have less files, so I am transferring files from the RAID to an external hard drive – and then will delete the files so it can run well tomorrow.  It’s hard work, and takes time, but it will get the instrument in shape again.

Today it was pretty decent weather for both SIMPL and for CAR. We were out early in the morning, and both SIMPL and CAR were able to gather great datasets over Howland.  Their teams are really pleased with the data collected today.

Unfortunately at the very end of its last run, CAR developed a problem.  Now the instrument is no longer responding.  The good news is they did get a full day of data – it was good data, and they completed the science data they needed to collect over Howland.  They think they know what is wrong, and it can be fixed, and that is good, too.  The bad news is that they cannot fix it here, tonight.  They need to go back to Wallops to fix it.  So CAR is off line for the rest of our trip.  But it will be ready for the southern flight campaign, which is supposed to start on Wednesday next week. 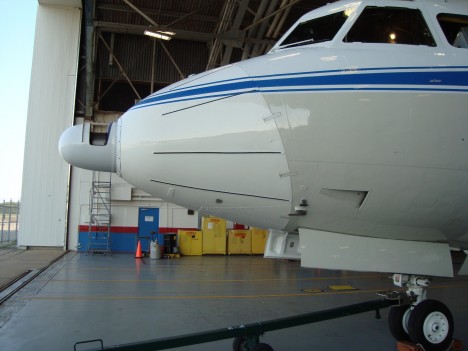 SIMPL had a better day, at least over Howland Forest.  They gathered very good data over the sites we’ve measured in Howland and the instrument worked really well all day long.  But SIMPL did have a problem of its own.

I think I told you yesterday that we needed to have authorization to turn the lidar on over Quebec.  Well, when we left this morning, we had no authorization.  We tried hard to get permission, but it never happened.  We had it permission for last week, but someone had not thought to extend it for any additional time, in case we had trouble.  Of course, we did have trouble.  Now SIMPL has no trouble, and we have decent weather – but no permission.   Without permission, we definitely would not turn the instrument on over Canada.

The radar was no trouble over Quebec.  We had our permissions in place for that, so we flew the sites with the DBSAR.  We collected plenty of data for DBSAR, although we were working to recover data each time the computer crashed.  I think the data will be okay, but we just have to analyze it and see what was able to be captured.  I certainly hustled all day long, and had no time to sight-see out the window today – there was too much going on with the RAID.

The sad thing was, late in the afternoon the SIMPL team heard that the authorization had been granted.  But it was too late.  We could not turn around and go back.  It does open the door for tomorrow, though, and we hope to get back to Quebec and finish our work.

There is another site nearby which is very interesting, too.  That is Bartlett Forest in New Hampshire.  It’s an important site for us. It has been recently measured on the ground and with from the air with other instruments.  We very much want to go there tomorrow, and we want to go back to Quebec tomorrow, too.

One challenge we have at Bartlett is that it is a military area, and there some restricted areas where we cannot fly.   Some of those areas change every day, and we won’t know until the morning what areas will be open at what time.

We do know that we cannot fly high there, and that is difficult for the radar.  We can make the lidar measurements with SIMPL easily, it likes being low.  But the radar likes being high.   With radar, the angle of incidence varies a whole lot when you are down low, from the near edge and the far edge of the image.  The higher you can fly, the smaller the variation.  From space, the variation is very, very small.  But near the ground, you can get 40 or 50 degrees variation, depending on high you are flying.  At Bartlett, we can’t fly over 2 km high because the airspace above is restricted.  The lidar will do just fine at that altitude, so we will get good data from that, and we’ll squeeze the radar in at the highest altitude the pilot can give us.

So you see, it’s all very complicated.  When the airspace will be open, what is restricted and what is not, and what the instrument likes for best data.  It all has to be thought about and worked out, if we are to collect data.

It’s supposed to be a good day weather-wise.  New Hampshire looks great in the morning.  Quebec may have some scattered showers, but we should be able to get there when there is not much rain, at least we hope we can work it out that way.  SIMPL has permission now, and we want that data.  We also really do want to redo the DBSAR data as necessary, since we had some trouble.  We’d also like to implement 2 interferometric passes offset by 60 meters with the DBSAR.  We’ll do two of those measurements over the sites, then that is it.  The two passes for DBSAR alone will take about an hour. 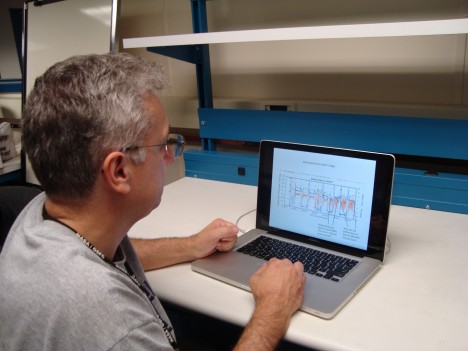 Our plan for tomorrow is to get up early and check to see when we can fly what areas in New Hampshire, and check on the weather in Quebec.  We’ll then figure out which one we’ll fly first.  After flying New Hampshire and Quebec, we transit to Wallops, arriving there late afternoon.  And that will finish this leg of the field campaign.

Next week we’ll be flying south.   We hope to fly over sites in Florida Wednesday morning and collect data from all three instruments.  We are also discussing the possibility of leaving Wallops on Tuesday mid-day, and flying straight to Florida, making no measurements. This would get us there so we can start collecting data first thing in the morning.  The weather is a lot better in the morning in Florida – the afternoons usually cloud up and have rain.

And speaking of weather – there’s another storm out in the Atlantic Ocean.  We looked at this new storm – Katia – and it’s not supposed to hit Florida.  If we have weather from the storm, well, we’ll take care of it.  We do have some extra time built into our schedule, a contingency week, so if the storm begins to head towards where we are working, we have the ability to postpone the flight.  Now, if we have more storms after that, then we are done.  We don’t have use of the aircraft forever.   September 16 is our last day.  After that the aircraft has to get ready for the new mission.

This entry was posted on Wednesday, August 31st, 2011 at 9:59 pm and is filed under Eco3D: Exploring the Third Dimension of Forest Carbon. You can follow any responses to this entry through the RSS 2.0 feed. Both comments and pings are currently closed.

One Response to “International Forests”