We had a great day and gathered fantastic data.  It felt so good to be working and getting the data – finally.  Unfortunately, our flight only lasted three hours.  Then the Mission Manager, Martin Nowicki, came out of the cabin with a serious look on his face.  He gave us bad news:  there was bad weather threatening, and we had no choice but to cease collecting data immediately and return to the Bangor airport.  What a disappointment to be reined in by bad weather! 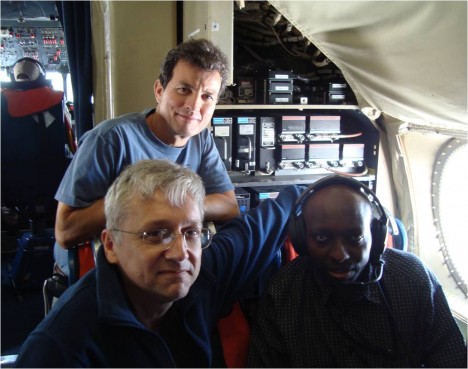 Well, field work is always risky, and science flights are always at high risk of running into problems.  You need three things to do remote sensing from the air:  a stable aircraft, functioning instruments, and good weather.   The aircraft has been perfect from the beginning.  The instruments are finally humming along perfectly.  But now we don’t have the weather.  Sometimes it’s just hard to get all three things working together.  All you can do is your best, and persist despite difficulties.

And we’ve done that.  I’m very gratified that we were able to get three hours of flying in today – it was excellent for the DBSAR, which can acquire accurate data even through dense clouds, like today’s conditions.  We were able to fly many of the most critical lines and we were able to look at some of the data later in the day, and it looks just great.

So now we do know that the DBSAR works over the primary forests we wanted to look at on this part of the mission.  We really wanted additional data, but what we were able to collect is very strong and I’m satisfied that it will be very valuable for our work.

Today’s emphasis was on the DBSAR, but we’d hoped to be able to run CAR and SIMPL as well.  Unfortunately, there was enough cloud cover that they couldn’t gather much data over forests, but they did get to do measurements over cloud.  Both instruments are used in other research for cloud cover, so they were able to take advantage of the situation to work on cloud reflectance.  Not our current mission, but it’s better to gather some information than sit there unable to do anything useful.

With the DBSAR, were wanted to get data in multiple polarizations, so we made a run north to south and then a run south to north swaths over the same area.  We then fly another set of lines in the same direction, to get additional looks at the same area to use for interferometry, which helps us understand the three dimensional structure of the forest.  Then we cover the plot in a wide swath mode, taking measurements across a wide area that reaches out from both sides of the plane.  We are experimenting with single pass interferometry in this mode, too.

Under ideal conditions, SIMPL would measure the forest height and vertical structure of the forest.  The vertical structure is the way the branches and leaves are structured.  Knowing the structure can help us understand how the canopy is put together, so it can help us understand forest type, stand density and biomass better.  Our DBSAR will give us a broad swath of data, while SIMPL will take more limited spot samples of our swath area, but they should work together well.

The CAR will be used to assess the bidirectional reflectance of the forest canopy.  Those measurements are related to the amount of leaf area in a canopy, whether the leaves are structured in clumps or are more uniformly distributed throughout, and also helps assess what type of forest we are looking at.  So it’s a helpful addition to the DBSAR and SIMPL data.

Despite the bad weather, the only problem I experienced was the inability to collect ground data with CAR and SIMPL.  It was a cloudy day, but we didn’t see any rain until after we landed at the airport. We did get a thunderstorm then, but it didn’t seem like anything particularly severe to me.  Inside the plane, we felt no turbulence to speak of, and the ride was smooth most of the day.  That P3 is really a great plane, and the crew is top notch, so it’s no surprise we had a good flight, despite weather.

After we landed, I called Guoqing at Howland Forest to see how he was doing and what the weather was like there.  He reported that the forest didn’t have any rain until the afternoon. That’s great news, and meant that we were taking our measurements in fair weather in the field, and they were able to measure at the same, time, too. That’s kind of nice to think that our colleagues were taking measurements in the forest as we flew overhead. 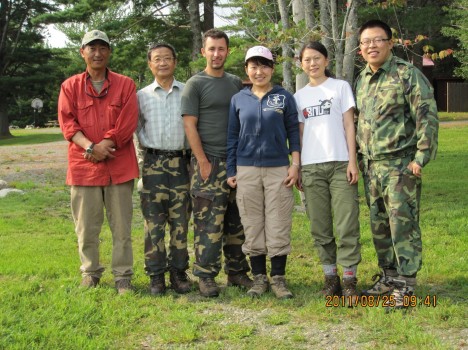 It was disappointing for the flight to be scrubbed this morning, but the weather news is even worse than that.  Hurricane Irene is now predicted to come up the Delmarva peninsula, and the threat to Wallops is real.  The experts at Wallops have decided that the P3 would not be safe weathering a direct hit of a Category 3 storm, which appears to be a possibility at this point.  So they have called the plane home.  They want to send it to a safe site in West Virginia before the end of the day tomorrow.  So we go home in the morning.

The weather in Bangor is supposed to be beautiful tomorrow, with no rain and plenty of sun in the forecast.   Now we’ve finally got the weather we need for a great day of data gathering. And our instruments are running perfectly.  But now the third piece is missing – we don’t have an aircraft.

So, thanks to Irene’s approach, we head home tomorrow.  We’ll be at Wallops by 10 a.m., and then I’ll join the coastal evacuation traffic heading west.  All I can hope is that the Bay Bridge – a terrific traffic bottleneck for ordinary summer weekend beach traffic – isn’t jam-packed with evacuation traffic.

The Howland crew plans to work in the field all day tomorrow, then they try to get back to Maryland in time to make a few storm preparations.  Most likely, they will drive all night long, from Maine to Greenbelt, swapping drivers to make the best time.

Despite our difficulties, the mission has really only just begun.  We’ve got the Eco-3D South Flight to fly shortly, as well as flights over sites in Maryland.  We’ve only just begun the blog, too – we’ll continue soon.  Stay tuned!

This entry was posted on Thursday, August 25th, 2011 at 12:47 am and is filed under Eco3D: Exploring the Third Dimension of Forest Carbon. You can follow any responses to this entry through the RSS 2.0 feed. Both comments and pings are currently closed.

2 Responses to “Success: Short but Sweet”