This morning started out just perfect for collecting data from the air.  It was a beautiful sunny day with good weather, and we did our best to take advantage of it.  We were up in the air early and take-off went well, without a hitch.  The check-out flight for DBSAR wasn’t quite so good.

We’d hoped that the instrument check out portion of the flight would prove our DBSAR to be sound, but that didn’t happen – the intermittent problem showed back up.  We had to land at Wallops again, and hoped we could fix it quickly. But no quick fix was available.  Our engineers will need to order a part and then do a major fix of the DBSAR.  Or more specifically, the RAID for the DBSAR. 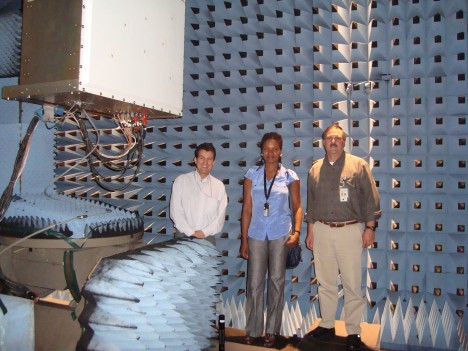 RAID stands for “Redundant Array of Independent Disks”.  It is basically connects five discs together, and distributes the collected data across those discs, so we can collect high volumes of data very quickly.   The RAID has experience two problems. First, the discs don’t sync up correctly with the computer. The second is that is they sometimes don’t record at a fast rate. Sometimes they only record at 30% of expected speed, so this really limits the data that they can acquire.  So we can’t use the instrument like it is, we really have to fix it before we make our science flights.

Last night we planned on making to Maine today and making measurements, but the nagging problem with the RAID meant we had to do a thorough check out and see if we could get it fixed.  We did the checkout, and it is clear there’s no immediate fix available.

After studying weather and timelines, we’ve decided that we have one day to fix the RAID.  If it can be fixed tomorrow, we’ll fly Thursday and Friday.   If the instrument is still being stubborn on Thursday morning, we’ll likely have to scrub the entire set of flights this week, and I’m not sure what that will mean.  We need to find a way to collect our data, somehow.

The good news is that while we were checking out the radar we also flew 3 lines over measured forest plots at Wallops.  The SIMPL instrument appeared to be working fine, and the CAR instrument also acquired good data.  So all we have to do is get the DBSAR fixed, and we’re golden.

We also had a little excitement of a different type this afternoon.  Well, it was very little excitement here, really, although our friends and loved ones at home sure had stories to tell.  We were sitting in our meeting when a 5.9 earthquake struck our region!  Personally, I didn’t feel a thing, but someone else did mentioned feel something odd.  Pretty soon, though, we had people checking in to see if we were okay, so we found out about the earthquake pretty quickly.  I guess there is something about the soil at Wallops, or between Wallops and the epicenter in Virginia, that prevented most of the tremors from shaking us up.

And if earthquakes and stubborn instruments aren’t enough, there’s this giant hurricane threatening the east coast.   It’s in the Bahamas now, and our weather is beautiful, but it is tracking towards us and predictions are unclear how soon it may arrive.  If it speeds up, it may impact our return flight home.  None of us want to be cut off from home as Irene works her magic here, then comes calling in Maine.  So any decision we make will take the storm forecasts into close account.

You know, this is a pretty good illustration of what science in the field can be like.  Sometimes it sounds fairly glamorous to be a scientist and travel around and do cool things – at least that’s what I’ve been told.  And yes, field work can be fun, no doubt about it.  But a field campaign really is work and like any other work, it can be both difficult and frustrating.  The malfunctioning instrument is just part of the picture.  Such stuff happens, and we’ll get it fixed and move on.  The earthquake and hurricane?  Well, they are just a little bonus excitement.   I’m betting we’ll get at least some good data before this section of the campaign ends, despite all the challenge.

So our plan is to give Rafael Rincon, the DBSAR Principal Investigator and Martin Perrine, the DBSAR Instrument Engineer, a full day to fix the RAID.  If they can get it fixed and tested on the ground by the end of the day tomorrow, then we’ll fly early Thursday morning.  We’ll then fly up to Maine, and do an extended day of measurements over Maine and New Hampshire, but we’ll have to delete the site we’d hope to fly in Canada.   We’ll also fly Friday, and hope to return to Wallops Friday night.  If necessary, we can come home on Saturday.  At this point, our next move depends on the RAID.  Oh, and I guess Hurricane Irene gets a vote, too.

I do want to say that everyone here is working really hard.  Everyone is cooperating and in a good mood despite the troubles.  The flight crew, too, is very helpful to our team and they, along with everyone, are working hard to make this mission succeed.   Flights are risky business, and they don’t always go as planned.  In the end, we’re going to get our data, I am just sure of it.  Meanwhile, we’ll work hard and enjoy our work as much as we can.

This entry was posted on Tuesday, August 23rd, 2011 at 12:46 am and is filed under Eco3D: Exploring the Third Dimension of Forest Carbon. You can follow any responses to this entry through the RSS 2.0 feed. Both comments and pings are currently closed.

One Response to “Earthquakes, Hurricanes and Stubborn Instruments”