What Is ROGUE and What Has It Done For Me Lately? 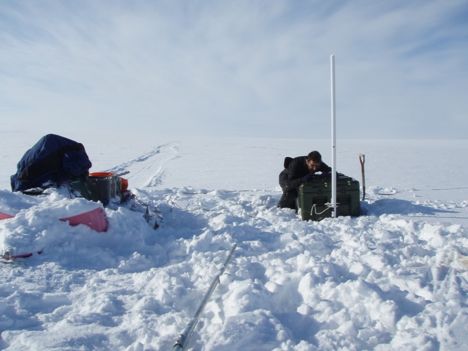 On the way up to Greenland a few weeks ago, we discussed very briefly the science that has brought us here to Greenland this spring. Now that we have some pictures of our work, let’s discuss it in a bit more detail.  As you already know, Matt and I were traveling about by snowmobile to establish GPS stations to measure ice sheet motion. The major goal of the project is to monitor the conditions at the bottom of the ice sheet and record how the environment down there changes with time. Our part of the project will record how the ice sheet velocity at the surface changes, by installing a network of GPS stations near Swiss Camp.

There has been a significant amount of research conducted in the Swiss Camp region over the past several decades. Among other work, researchers have mapped the ice thickness, the ice surface topography, the temperature and wind speed, and the ice sheet velocity. On the map, our GPS stations are indicated by the red dots, while the yellow stars indicate our two drilling locations. The blue triangles are monitoring sites maintained by Koni Steffen and measure the local meteorology as well as ice motion (in a long-term monitoring project by NASA scientist H.J. Zwally). The red curve represents a flow line — a path along which ice flows. If one were to put a marker on the flow line near the Swiss Camp station in the upper right of the map, it would travel down the ice sheet along the red path. Data indicate that ice flowing along our path ultimately ends in a fjord that connects to the ocean. The red dot on bedrock in the upper left (QING) is our base station — a GPS station placed on rock that is essentially immobile, at least over the time period of this study. 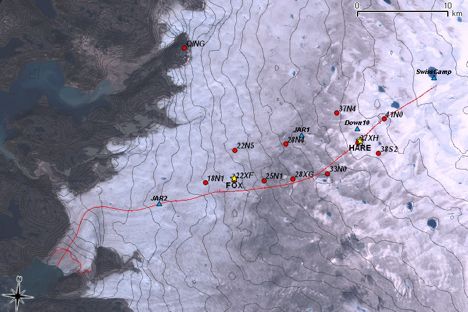 Our prior work in the area demonstrated that the surface velocity of the ice sheet is essentially the same between stations just 2 or 3 kilometers apart, but can be markedly different between points 5 or more kilometers apart. We also found that the velocity can change quickly during the summer, when lake drainages our common. The locations of our network of GPS stations (as shown on the map) are chosen to capture both the short term changes in velocity due to surface water drainage (which our sensors at the ice sheet bed should also record) as well as capture the spatial variability over a wide range of ice sheet surface elevation and ice thickness. 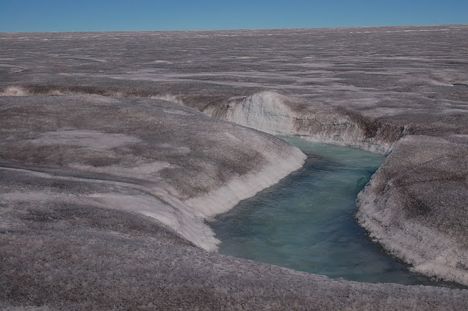 With luck, our GPS and borehole instrumentation will collect data for the rest of 2011 and well into 2012.  Together, the data from the project will provide insight into how and why the ice sheet moves the way it does during the summer season. This is important because one of the major goals of the ice community is to better predict ice sheet changes in the coming decades and centuries. A critical part of this predictive ability is a solid understanding of how ice sheet velocity changes as the amount of melt on the ice sheet surface in the summer changes. The ROGUE project is designed to provide this insight, as well as set up a reference data set for large-scale ice modeling studies.

This entry was posted on Thursday, May 19th, 2011 at 12:58 pm and is filed under MABEL: Spring 2011. You can follow any responses to this entry through the RSS 2.0 feed. Both comments and pings are currently closed.