Swiss Camp, Our Home Away From Home 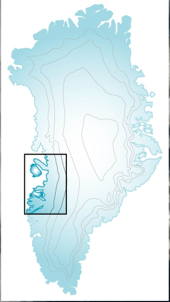 When working out on the ice sheet, it is useful to have a base of operations, so as to not have to move your whole camp every day you want to go to a new place.  For our project, Swiss Camp served as our base of operations. Swiss Camp is one of just a handful of semi-permanent bases on the ice sheet (along with Raven, NEEM, and Summit camps). It has been around in various forms for the last 20 years, and has served as a home base for many many research projects.

Swiss Camp tends to be occupied primarily during the month of May, when Koni and his students base their work out of the camp. This year, Matt and I have had the good fortune to work out of Swiss Camp as well. The camp consists of two insulated tents, each about 10 feet wide by 20 feet long, up on a plywood platform. Koni keeps a couple of snowmobiles at the camp (rather than flying them back and forth each season) as well as a supply of fuel and propane. The fuel is for the snowmobiles and generator, while the propane is used for heating and cooking.

The tents consist of several layers of insulating material stretched over a frame of arched steel poles. A propane heater in each keeps the temperature inside comfortable, even when it is cold and snowy outside. One of the tents is set up as a kitchen and dining area, while the other serves as the workshop. Each season additional tents are pitched for each person to sleep in, and lines of cargo stretch out from camp, creating a small town radiating out from the main tents. The camp is typically powered by solar panels and a battery bank, though the storm this year knocked down the solar panels. Koni will no doubt have them up and running again shortly. Duties are shared, with everyone pitching in to help cook (yes, even me!), and keep the camp running. Snow is gathered from upwind of the camp for drinking water, while Koni brings the supply of food for the camp each year.

Swiss Camp sits near the equilibrium line of the ice sheet. This is a line on the ice sheet where the annual snowfall during the cold months is balanced by the amount of melting during the warm months. This means that although Swiss Camp is buried every winter by snowfall, it melts out each summer. Over time, the equilibrium line has increased in elevation as climate has changed, and ice flow has carried the camp downstream. Now the annual melt is greater than the annual snowfall, leaving Swiss Camp perched up on stilts, and the camp must be lowered every few years. The last such change was in 2010, and the next will probably be in 2012. 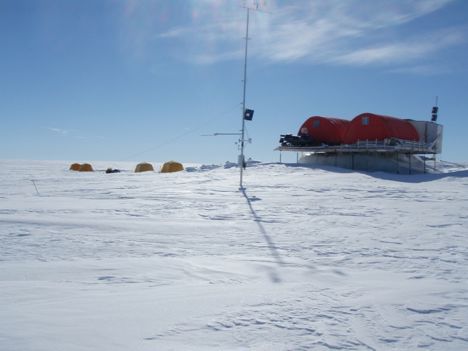 At the end of a long day of working outside, the red tents of Swiss Camp are always a welcome sight when they come in to view. 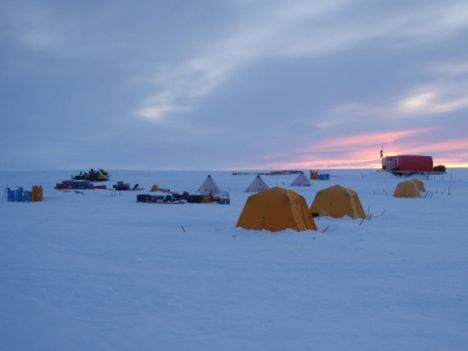 This entry was posted on Thursday, May 19th, 2011 at 2:10 pm and is filed under Real-time Observations of Greenland's Under-ice Environment (ROGUE). You can follow any responses to this entry through the RSS 2.0 feed. Both comments and pings are currently closed.