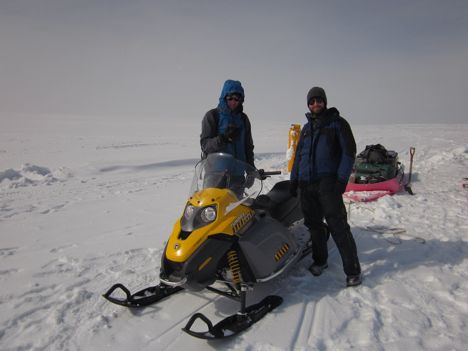 Each day we traveled to a new site in the area around Swiss Camp and set up a new GPS station on the ice sheet. We looked a bit like an Arctic version of the Beverly Hillbillies with Tom puttering the snowmobile out of camp pulling a big red sled piled up with boxes, bags, shovels, more boxes, pipes, solar panels, more pipes, and me precariously perched on top of it all. We crawled around at about 10 miles per hour to avoid rattling my teeth too much, especially when the wind has sculpted the blowing snow into crusty dunes called sastrugi. Our commute typically took about an hour which can be relaxing if the snow is soft and the weather is sunny and calm, or exhausting when it is windy and bumpy. 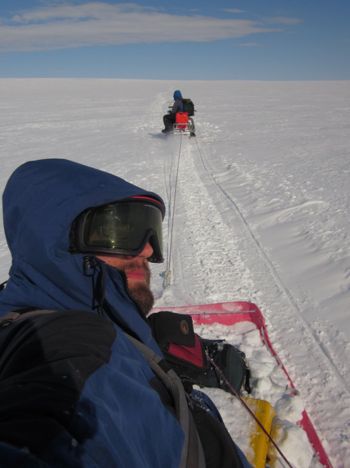 Because the ice sheet is pretty featureless, we traveled by GPS to locations that we had pre-determined but never visited. These x’s in the snow were chosen to provide information about both local and regional ice motion around our future drill sites. It’s a bit funny to travel to a specific spot on the ground that looks pretty much like every other spot from horizon to horizon. It’s also a bit funny to use a $100 handheld GPS to locate the site to install a high-precision GPS station, but you’ve got to use the right tool for the job.  Handheld GPS navigation revolutionized travel across the flat white terrain of the ice sheet – without it, losing sight of camp from fog or traveling too far could be disastrous.

Even with GPS, traveling across the snow covered ice sheet can be disorienting under heavy cloud cover when the light is flat and the horizon disappears into a monotonous world of white in all directions. In those conditions, bumps in the snow are only apparent after you have driven over them too fast, and it’s really hard to tell how big anything is. One afternoon I was driving home in poor light, and about half way back I swore there was a little bug flying along side of the snowmobile. My initial (perhaps irrational) thought was that a fly had somehow been blown up onto the ice sheet and happened to be going the same way we were going. I was so convinced by what my eyes were telling me that I started to speed up to keep pace with the intrepid little guy who miraculously was cruising along at about 13 mph. After about a minute of this nonsense, my depth perception instantly snapped into place, and I realized that the fly was actually the GPS station we had set out the day before, about a half mile off in the distance. That night after dinner, Tom regaled us with stories of poor light in Antarctica that was so bad that you could hardly tell which way was up or if you were even moving! 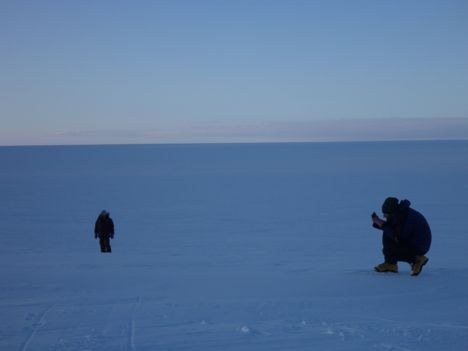 We were fortunate on this trip to generally have very good weather. On sunny days, the appearance of the subtle hills and valleys that cover this part of the ice sheet broke up the monotony, and the interplay of the low-angle afternoon sun on the snowdrifts created glittering sculptures of light and shadow that unfolded before us as we drove home. 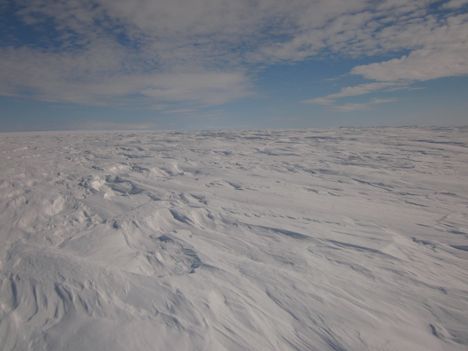 This entry was posted on Thursday, May 19th, 2011 at 1:16 pm and is filed under Real-time Observations of Greenland's Under-ice Environment (ROGUE). You can follow any responses to this entry through the RSS 2.0 feed. Both comments and pings are currently closed.