When we arrived at each study site, we began the process of constructing a GPS station. The first step was probing the snow for crevasses before we start unloading heavy equipment from the sled. By mid-summer, this region will all be bare ice but now it is still covered by about a meter of winter snow. Despite the heavy weights of the snowmobile and sled, we were much safer sitting on them than walking around because of their large surface area in contact with the snow. We deliberately chose sites that were less likely to have large crevasses, but we did encounter small cracks at a few sites.

Once we were confident that we had a safe area in which to work, we unloaded the sled and prepared our tools.  We thought carefully about what order we need tools and instruments, especially on windy days, because anything left out for too long is liable to be blown away or buried in drifting snow. On warm, sunny days anything exposed will be wet before long from blowing snow melting on contact with dark surfaces. 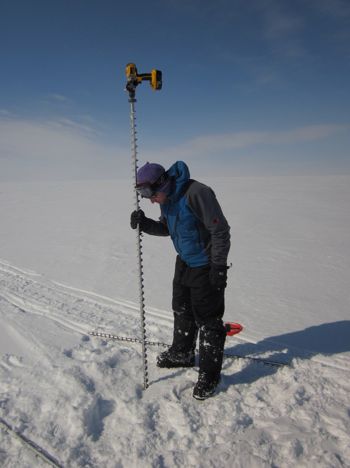 Because the ice surface on this part of the ice sheet melts about 2 meters (6 feet) each summer, we need to install long poles into the ice to keep instruments from melting out and falling over as the surface lowers. We used a cordless drill with an ice auger system to drill holes about 8 meters into the snow and ice. Once the holes were drilled, we couple pipes together to create poles long enough to survive two summers of surface lowering. 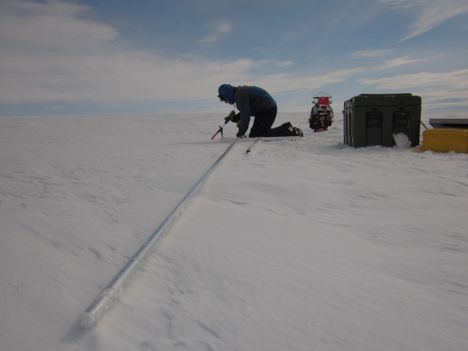 The crux of the operation was rotating the 8-meter (25 feet) poles into vertical position and down into the holes without damaging the poles or ourselves. Once in place, a GPS antenna is mounted atop one pole to measure the motion of a fixed point on the ice sheet. When we return in fall the antenna will be perched well over our heads. A second pole was outfitted with a solar panel on a PVC sleeve that will slide down the pole as the surface lowers.

The final part of the installation involved setting up a weatherproof box to house the batteries and GPS receiver and wiring everything together. The GPS receiver runs on power supplied by large 12V batteries that are charged by the solar panel. We designed the system so that the receiver will continue to collect data for a few weeks should the solar panel be buried in snow or destroyed in a large storm. 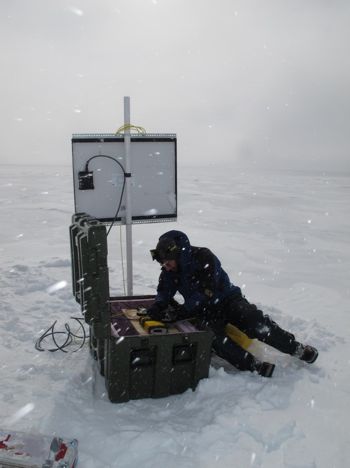 Once we made a final check to ensure that everything was connected properly and turned on (an important final step!) we closed and latched the big green box. The system will have to function on its own until we visit in fall. We said goodbye after loading up the sled, and pointed our caravan back towards Swiss Camp. 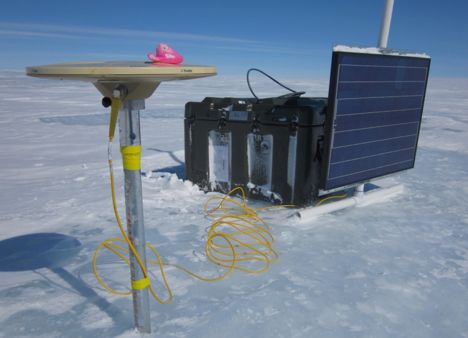 This entry was posted on Thursday, May 19th, 2011 at 1:43 pm and is filed under Real-time Observations of Greenland's Under-ice Environment (ROGUE). You can follow any responses to this entry through the RSS 2.0 feed. Both comments and pings are currently closed.