MABEL flew her final science mission of 2011 (4/5) over White Sands Missile Range. The weather over this area was clear when we flew it, however, weather rolled into the area just as the plane left our target.

White Sands was chosen as a MABEL target because we have been using the area as a ground-control site since ICESat was launched in 2003. Two ICESat tracks crossed in the center of the dune field; where they cross, ICESat researchers have recently planted reflectors that we hope to see in the MABEL data. These reflectors will help us validate MABEL’s elevation determination accuracy.

Also on this flight, we also attempted to collect data from deciduous trees in Arkansas. From Dryden Flight Research Center, to New Mexico, on to Arkansas, and then back to Dryden is a 9 hour mission. 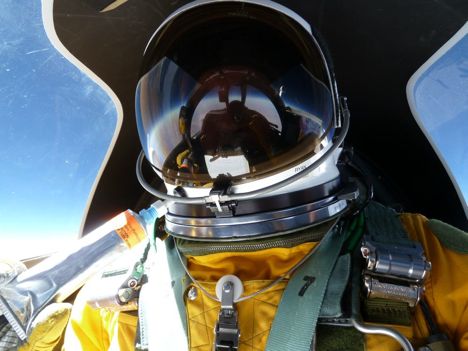 However, between White Sands and Arkansas, MABEL’s laser stopped firing. This is not something that we were prepared to deal with in the field. So, given that we were already near the end of this mission, we decided we’d call this trip a success, given all that MABEL had already accomplished and given the science objectives that the instrument deployment had met:

We are now headed home. We have had a fantastic time working with the pilots and mechanics here at Dryden Flight Research Center. They are great at what they do, making their components the smoothest parts of the complex MABEL equation. We might not have any other missions on the ER-2 this spring, but you can still follow their flight activities at their Twitter feed: @NASA_Airborne.

This entry was posted on Friday, April 8th, 2011 at 4:08 pm and is filed under MABEL: Spring 2011. You can follow any responses to this entry through the RSS 2.0 feed. Both comments and pings are currently closed.