The answer is blowing in the wind

We’re making tremendous progress on installation of the instruments onto the Global Hawk, and we’re almost done cleaning up the myriad of issues.

During the integration this week, we’ve had to cut holes into the aircraft.  I told Chris Naftel, the Global Hawk program manager, that we had to cut some holes into the plane for the Meteorological Measurement System (MMS). Chris replied: “I don’t want to hear anything about the holes. It pains me!”  In spite of Chris’ pain, the little MMS holes are critical for measuring winds.

You’re now asking, what?  Little holes?  For winds?  What kind of smoke and mirrors is that measurement? It’s actually a very slick little measurement that relies on the work of Daniel Bernoulli, a Dutch mathematician who lived in the 1700s.  Bernoulli recognized that a wind difference between two holes would create a pressure difference.  If you measure the pressure difference, than you’re measuring the wind difference.  You can use a global positioning system card (just like the one in your car’s GPS) to measure the speed and direction of the plane.  The difference between the speed of the air flowing over the nose of the plane and the plane’s ground speed will tell you the wind speed.  Thank you Dr. Bernoulli! 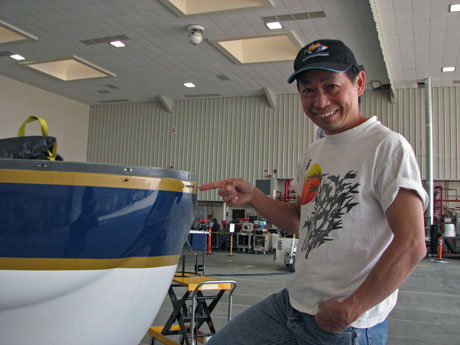 Thaopaul (Paul) Bui of NASA’s Ames Research Center has designed the MMS to measure these small wind differences using the little holes drilled around the nose of the Global Hawk.  The picture shows Paul pointing to one of his little holes.  There are a total of five to allow him to get the North-South, East-West, and up-down winds.

Sorry Chris, but no pain, no “science” gain.

This entry was posted on Thursday, March 25th, 2010 at 6:04 pm and is filed under Global Hawk Pacific (GLOPAC). You can follow any responses to this entry through the RSS 2.0 feed. Both comments and pings are currently closed.