All we need is just a little patience

There is an old Latin quote: “Maxima omnium virtutum est patientia.” Or
“patience is the greatest virtue.”  When it comes to mounting science instruments on an aircraft, you need to continually return to that quote.

We have 10 science instruments that we will be flying on the Global Hawk (GH). The instrument integration began as far back as 2007, with discussions between the GH operations team and the scientists.

When we got here last week, each instrument was placed on a bench for an electrical test and a communications test (more about this later this week). In the 1st panel of the picture below you can see David Thomson of Droplet Measurement Technologies with the Ultra-High Sensitivity Aerosol Spectrometer (the electronics jumble in front of the computer monitor).  UHSAS measures very small aerosol particles — so small that a million lined up end-to-end would only be several inches long. 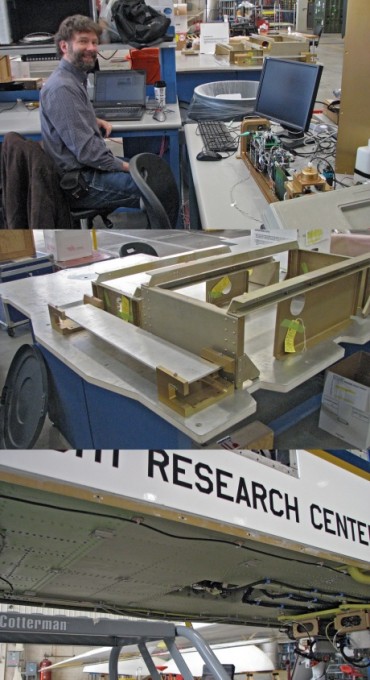 In the 2nd photo, you see a mounting frame sitting on a big table-like plate. UHSAS will mount on top of this “long table” which is fixed onto the plate.  After attaching UHSAS and a few other instruments, this plate will be flipped over and attached to the underside of the plane (panel 3).  Then we need to run cables to connect UHSAS to the GH’s computers and power.

All of the engineering, machining, electrical work, cable running, and testing takes time.  Obviously we want the best science observations, but safety comes first. We’re making progress on integrating our science instruments into the plan, but…see the first sentence of today’s post.

This entry was posted on Tuesday, March 16th, 2010 at 12:06 pm and is filed under Global Hawk Pacific (GLOPAC). You can follow any responses to this entry through the RSS 2.0 feed. Both comments and pings are currently closed.

2 Responses to “All we need is just a little patience”