Today is our last day of measurements. We took a radiometer measurement in the morning, and then dug the final snowpit in the exact spot that the radiometer was viewing during the whole experiment. That way, we will know exactly what the radiometer was seeing. The pit measurements took hours and it was cold today with the wind blowing. Ty spent nearly the entire day in the pit. Volunteer Michael Harvey, MD, helped. Still it took until sundown. The data appear to be OK for the whole experiment. What a huge relief!

Last week, our primary instrument (the radiometer) arrived barely in time & wasn’t even complete because of the big Washington DC snowstorm. But after many days of hard work by the whole experiment team & our great Storm Peak Lab hosts, we managed to get our measurements.

Snow measurements by satellite radiometers are the key to estimating how much water is held by snow across the globe. 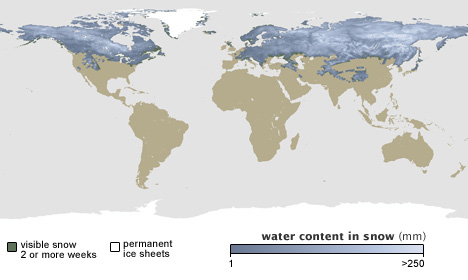 That means we should be able to develop a more accurate relationship between what a radiometer sees and the true snow water content. A more accurate relationship is what we need to improve satellite snow observations, and the most direct way to find that relationship is by doing a carefully-controlled field experiment…only it takes a lot of hard work by teams of scientists, engineers, and technicians to do one…plus a little luck. So many things have to come together, especially when the weather doesn’t fully cooperate.

This entry was posted on Tuesday, February 23rd, 2010 at 10:38 am and is filed under The Uphill Road to Measuring Snow. You can follow any responses to this entry through the RSS 2.0 feed. Both comments and pings are currently closed.