The weather here is finally absolutely fabulous.  It’s cool and clear today.  It feels just like Maine in late August should feel.  We’ve got another Hurricane out in the Atlantic coming our way, but I think Danny will wait until the weekend to bother the area. For now,  it’s fine field weather.

Today’s goal was to find and measure an area we’d identified as a low biomass site.  Before we came to the field the DESDynI scientists sat down and looked at data from our existing instruments.  In order to thoroughly test our instruments and algorithms we need to look at a wide variety of sites, both low and high biomass.  For today’s sites we relied on LVIS (NASA’s Lidar Vegetation Imaging Sensor) data, which is a laser altimeter flown by aircraft over target areas.  That data showed this as a very low biomass area.  We wanted to check it out. 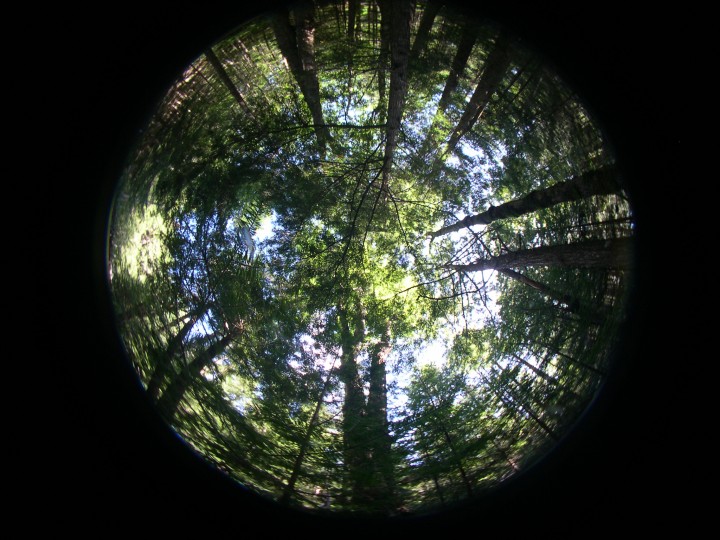 What we found was a very dense stand of spruce and deciduous trees, almost all below the 10 cm cut off for measurement.  Only a few trees were over that size and they were far apart, so we had to push through very dense stands of spruce, fir and pine to get to the bigger trees.  We made few measurements but we had to work reallly hard and spend a long time to get them.  We also sampled the smaller trees, quantifying the number of trees for each diameter range: 0-2 cm, 2-4 cm, 4-6 cm, 6-8 cm or 8-10 cm.  Our impression was that LVIS was correct – this is a low biomass site.  We now have data to calculate the actual biomass, so we can refine the algorithms and continue to improve our instruments.

We also wanted to go to a very high biomass site, so this afternoon we went to an area that LVIS data had indicated as such a site.  It was an open forest with very little understory.  It was rich in species diversity: there were a lot of quaking aspen – some really, really big ones as a matter of fact – a few large oaks, big ash and some fir.  Mixed in were some other trees such as birch, basswood and – surprisingly – several small American Elm, Ulmus americana.  Again we found that yes, we can rely on our data – this is in fact a site with high biomass.

It was pretty cool to see the Elm trees.  At one time these trees were seen everywhere, both in the wild and in suburban landscapes throughout America.  With a spread of 60 – 120 feet and often near 100 feet high, they were strikingly beautiful.  Their graceful shape and size impressed even the settlers, who called them “the lady of the forest”.  Today the Elms of old are almost all gone and the few that remain are mostly pretty small.

The world changed for the American Elm in about 1930, when Dutch elm disease was imported into the United States on lumber and began to spread.  In 1930 it was estimated that there were 77 million American Elms in the cities and towns in North America.  By 1976, 56% of the trees had been lost.  The tree population has never recovered.

Dutch elm disease is caused by a wilt fungus.  When a tree is infected it first wilts then quickly dies.  The fungus can be carried from tree to tree by bark beetle or spreads from root to root underground when the trees are planted closely together.  It’s called “Dutch” only because it was first scientifically identified in Holland after an outbreak occurred there – it is not a native Dutch disease.   There have been many efforts made to control or cure the fungus, but nothing has yet proven entirely satisfactory.

There are still a few giant Elms left, thanks largely to careful conservation efforts.  The largest American Elm remaining in New England lives in Yarmouth, Maine.  Affectionately named Herbie by a girl decades ago, it is 100 feet tall, about 20 feet in circumference and has a 120 foot spread.  It has survived 15 bouts of Dutch Elm disease, through the dedicated work of the town tree warden.  But the disease has finally won.  Herbie is now so badly infected that all agree it is a fatal case.  He will be cut down this winter.  Chances are that he will not be replaced, ever.  Today’s young trees will almost certainly catch blight and die before they ever reach their growth potential. 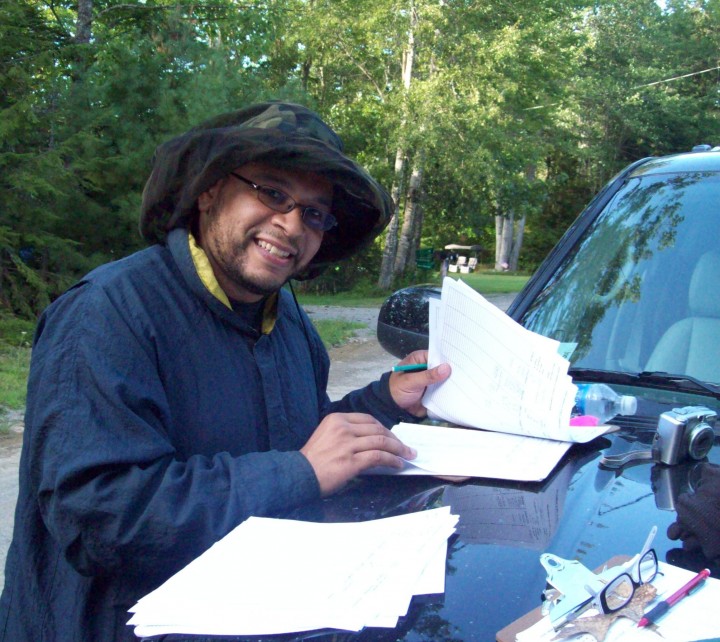 This morning Torry Johnson, Assistant Chief, Laboratory for Hydrospheric and Biospheric Sciences, NASA Goddard Space Flight Center, Greenbelt, Maryland came to the field.  He wanted to understand, first hand, what goes on in a field campaign so he came out for a site visit.  He’s not one to just stand around and watch others work, so he asked if he could help us out.  We gave him some training and a clipboard and he went to work.  By the afternoon he was wearing a bug hat and was making tree measurements like a true veteran of the field.  I was extremely happy to  have his good help, but even more pleased that another of our science managers would take the effort to come to the field to see what we are doing.  Torry expressed that he had a new appreciation of how important field work really is, as well as how difficult the work really can be.

There were a lot of trees to measure in the afternoon site.  We worked as hard and fast as we could to finish, but the sun got too low in the sky before we could wrap it up.  We’ll return here tomorrow and then, if we have time and the weather holds, we hope to head out to what we have identified as a bog to see what we can find there.

Then we’re done – it’s all over tomorrow night.  It’s hard to believe we’ve been in the field for two weeks already.  I’m starting to feel it a bit.  I’ve got a couple scratches and bruises from too close encounters with a few branches. When I sit on the ground, I’m getting up a bit more slowly than before.  Today, when a spider landed on my neck and started crawling along, tickling the neck-hairs, I had little reaction. No adrenaline, no startle, no fuss.  All I had the energy to do was to note to myself, a-yuh, I guess it’s a spider and then quietly brush it off.  You know, I think I must be awfully tired!  It has been a very intense – and very enjoyable – two weeks in the woods.

This entry was posted on Thursday, August 27th, 2009 at 11:58 am and is filed under North Woods, Maine 2009. You can follow any responses to this entry through the RSS 2.0 feed. Both comments and pings are currently closed.