On the way to today’s site we passed a small plantation of American Chestnut trees.  They are part of a program run by a nonprofit organization, The American Chestnut Foundation, to restore blight-resistant American Chestnuts to their native range.  What they are doing is crossing native “Mother” Chestnuts with highly blight-resistant Chinese chestnuts.  As the progeny grow they are tested for blight resistance by exposing them to the fungus.  The most resistant trees are again crossed with the American trees. It’s important that the trees look and grow like American Chestnut, with the Chinese trees only conferring their resistance.  It can take six generations or more before these goals are met to satisfaction. Only then will the tree be considered a candidate for planting. 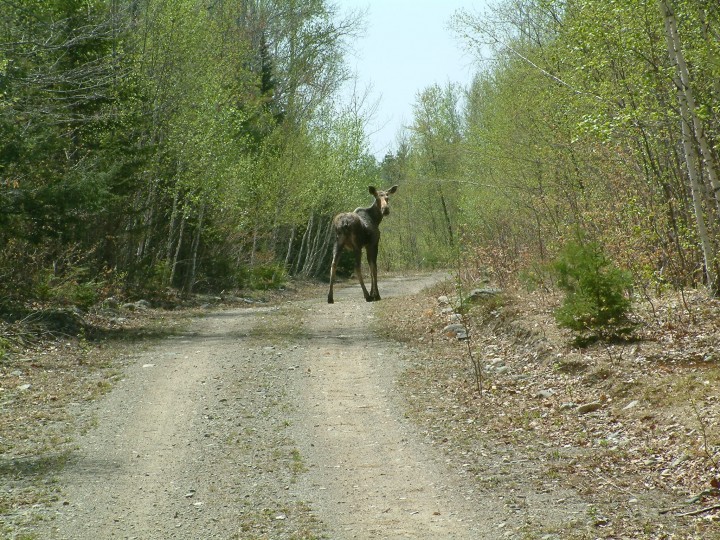 The trees that I saw on this plantation are small, not yet anything like the huge trees that once lived in the Appalachians.  Mature Chestnuts averaged about 100 feet tall and five feet in diameter, that’s about 150 cm DBH or nearly twice the size of the biggest tree we’ve measured in this forest so far.  Many Chestnut trees were measured at 8 to 10 feet in diameter.  One of the biggest was found in North Carolina – it had a diameter of a whopping 16.5 feet!  The plantation trees are small, but they are just starting out.  It’s really exciting to think that one day one of these trees may grow to historical size in the wild.

Today we worked at a site that was moderately well drained with a lot of deciduous trees.  We found some red pine along with the white pine.  Red pine has thicker needles in groups of two while white pine’s needles are thin and grow in groups of five. This is the first time I recall seeing a really big red pine on this trip.  It’s also the first time this trip that the forest floor was covered in a layer of deciduous leaves.  Up until today it’s been mostly pine needles on the ground.  After a week and a half in Maine, it seemed strange to see the forest floor looking like a forest from my home in Maryland.  The site was very high biomass and pretty easy to work in.

The wildlife is starting to show up, little by little.  I saw three woodpeckers fly overhead today.  I’m not sure, but I think they may have been the three-toed woodpeckers that live around here.  There is an osprey nest in the forest.  I’ve heard that there is a Great Blue Heron rookery in a power line right of way.  They’ve fledged their young, but the nests are still there.  Sassan reports that he and some people from his group all saw a big bull moose early this morning.  They were driving on one of the roads and came up on him.  He trotted down the road in front of the truck awhile, then finally entered the woods.

And then there are the bears.

No, no- no one has seen bears, yet.  But I understand that the Howland folks have met people with connections to bears.  The story I hear is that early last week our folks discovered a few strange things in the woods – like stale doughnuts and other curious tidbits.  Not long after, they were driving on the road when they came across some folks setting out food for bears.  These bear hunters were pretty surprised to see our crew, and had some words for the Howland team, essentially, “get out of these woods, you’ve got no right to be around these parts”.  I understand our folks were polite but gently insistent that, oh yes, we do in fact have a right.  It was not the friendliest of meetings.

Now, hunting and fishing has always been an industry in Maine, with deep roots and high economic importance.  For some guides, the annual bear hunt is their major bread-and-butter for the year.  So they don’t appreciate anything that they view as interference.  Some have been hunting the same land for generations and feel a bit of ownership, so they don’t welcome strangers.  In Maine it is legal to set feeding stations and hunt bear from those stations, everyone knows that, so a bit of scientific inquiry as to what they were doing probably seemed like rude questioning.  The bear hunt starts in five days – on Monday the 31st.   They are trying really hard to bring in the bears.  We’re noisy and smell bad and probably are driving the bears far away. 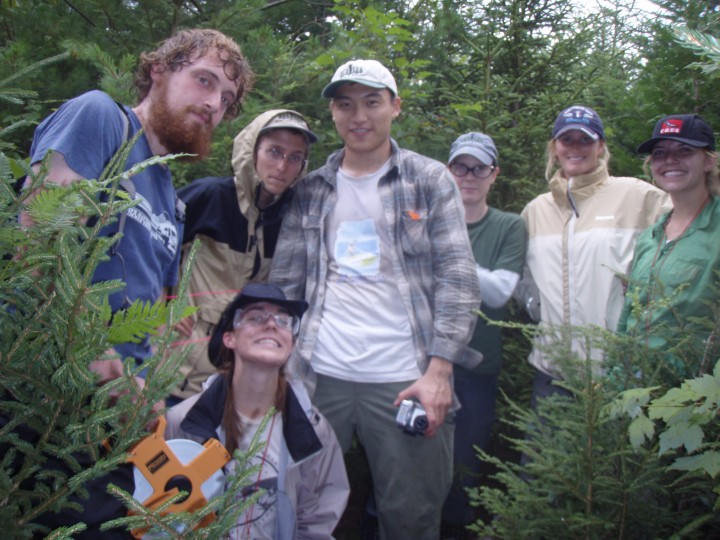 The Howland Forest itself is a preserved forest, but it is surrounded by private and industrially owned land.  The land owners allow us to use their land for science.  They allow the hunters to purchase the rights to set bear stations and to guide hunts. And the land is logged, too. This is a multi use forest. The bottom line is: both sides had an absolute right to be on the land.  Both sides were surprised to see the others and both sides were working at cross-purposes in the forest. So it’s no surprise that the meeting turned out to be a bit, well – tense.

Apparently word got back to the hunters that yes, these scientists with their trucks, their yellow ropes, pink flags, loud voices and noisy, bear-repulsive ways do have an absolute right to be in here.  I hear that there was a head nod or two as paths crossed, but that the hunters have been seen rarely since late last week.  There are also less doughnuts on the ground. And everyone in our group is more aware that the black bear may be congregating all around the camp.

At the end of the day we went to tomorrow’s site and laid it out.  It has some very big trees with a very dense under story of white pine and spruce.  That’s not good news. When the under story is balsam fir, it’s not so bad. Balsam fir has soft needles that don’t scratch and it smells really nice when brushed or broken.  Spruce, however, has very sharp needles and stiff branches.  It can hurt to a lot push through a stand of spruce.  Tomorrow we need to wear long shirts and take extra care to prevent eye pokes.  It could potentially be a painful day.

This entry was posted on Wednesday, August 26th, 2009 at 11:19 pm and is filed under North Woods, Maine 2009. You can follow any responses to this entry through the RSS 2.0 feed. Both comments and pings are currently closed.