Today began with a short trip back into time.  We wanted to look at a plot in a very old forest that was in preservation.  Rick Dionne with the USDA Forest Service and the Chief Forester at the Penobscot Experimental Forest came out to help us locate it.  The site was very close to Leonard’s Mills Historic Settlement, which is a reconstructed logging town of the 1790’s.  Since the forests we’re working in have all been logged we thought we’d take just a little time to look at the museum. It was a very interesting place.  They had a water-run sawmill there as well as several pieces of antique forestry and logging equipment.

Lumbering started in Maine back in the 1600s in a very limited way.  By the mid 1830s  Bangor, which is close to us, became known as the “Lumber Capital of the World”.   The first sawmill was built in Bangor in 1772.  In it’s heyday, the town boasted of  300 saw mills. The wood for the mills came primarily from the northern Maine woods.  Millions of logs were floated down the Penobscot River, at times so dense that a person really could walk from one side of the river to the next on top of the moving logs.  The lumber was used, in part, for the large local shipbuilding operations. By 1880 the most accessible trees in both the local and the northern Maine woods had been harvested and the loggers were heading west for fresher and richer forests out west. 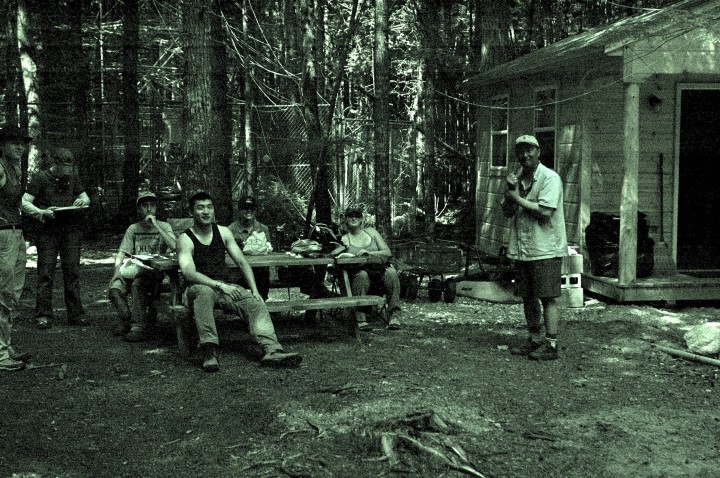 After our brief tour of Leonard’s Mills we walked a mile or so into the woods, carrying all our gear with us.  The plot started near a wetland then went up a slight incline.  The first few subplots had a lot of young understory,  some very large white pine and hemlock and a just a few deciduous trees.  Then it graded into a totally open forest floor.  Again, we see a great deal of change– from wet, to a heavy understory, to mature and open – all in one hectare.

This old growth forest has not been disturbed since the logging of the 1800’s.  The trees are thought to be 150 years old or older.  As you might guess, trees of this age can get quite large.  We measured some white pine with diameters right around 86 cm.  The tallest had a height of 34 meters, or about 111 feet tall.  Those are giant trees.  We decided to eat our lunch In the middle of this old growth forest, surrounded by these giant white pines.  It was just remarkable.

As we walked back at the end of the day, we passed a cut in the hillside which left the soil profile exposed. Looking at the soil reminded me that, although we are out in these woods measuring trees, we really are not doing much at all with the soil.  We do appreciate soil.  As we look at species diversity and growth  habit of the trees, we know that soil is playing a large role in what grows and how it grows.  But we’re real interested in closing the carbon budget and we know that the trees are just a part of the story. There’s a whole lot of activity going on below ground, too.

The soil in today’s area is basically sand, with a relatively thin cover of richer topsoil.  The trees root into this sand and turn the nutrients they find there into leaves and needles.  The leaves and needles, along with dead limbs and woody debris, will fall onto the top of the soil.  Over time it will decompose and be used for nutrients for the trees and it will also help develop the soil, which means that the sandy soil will slowly become richer in partially decomposed organic matter.

In term of carbon, the tree and it’s leaves are full of carbon-rich organic matter.  When it lands on the ground and becomes well incorporated into soil, the carbon stays there, lock in.  Soil, then, becomes carbon storage.  There’s actually more carbon being stored worldwide in the soils than there is in the forest biomass.  Soil is a huge storehouse of carbon. 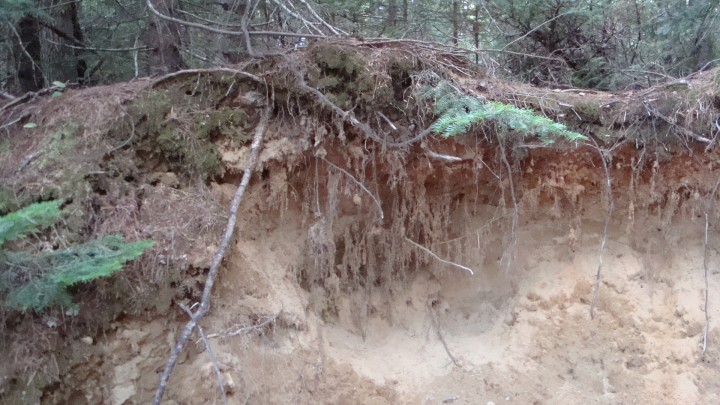 In some areas of the world, in the northern latitudes and the highest mountains, the soil is frozen year round. This frozen soil, called permafrost, keeps carbon locked in storage with no chance to decompose.  In a warming climate permafrost will thaw. That allows decomposition of the organic matter, resulting in the release of carbon dioxide.  This is a potentially huge release of an important carbon sink.  It hasn’t happened in a big way yet, but it could happen if the climate continues to warm.  What is happening now is that permafrost is, in fact, beginning to melt in many areas.

We are trying to improve our understanding of the earth’s carbon budget.  I think I’ve mentioned that before.  Let me see if I can clarify what we mean.

There is a balance between the amount of  carbon going into the atmosphere each year as well as the amount going out of the atmosphere each year.  Parts of this we understand fairly well.  For example, we know how much is going into the atmosphere due to human activity.  That’s relatively straightforward to measure.  We have a good idea of how much goes in and out of the ocean.  We do not have a very good idea at all about how much goes into or out of the land and it’s vegetation.  The reason for this is the vegetation on the land is very heterogenous and subject to natural and man made disturbance.  In other words, vegetation is very diverse and constantly changing.

We’d like to figure out the vegetation piece.  We do know that in the forested regions we have a potential for CO2 to be taken up and stored.  And if a forest is cut or burned or disturbed we know that there is a large potential for carbon dioxide to go back into the atmosphere.  This is important for many reasons, including the fact that, without a clear understanding of how the carbon budget works it may be difficult to come up with sound policy.  The more information we have about our Earth, the more wisely we can manage our future.

This entry was posted on Tuesday, August 25th, 2009 at 12:35 pm and is filed under North Woods, Maine 2009. You can follow any responses to this entry through the RSS 2.0 feed. Both comments and pings are currently closed.