(May I Please Borrow a Cup of Sugar — and your Internet Connection?)

NOTE: This was the journal that I was in the process of writing when I learned that I might have a chance to connect to the internet from the Galapagos National Park Service outpost just south of Beagle Crater so I hastily put a somewhat shorter journal together in case that I actually was able to connect. As you’ve seen, I did indeed get to send that journal and here is a little bit about the story behind that little adventure.

Tagus Cove — the very name conjures up perhaps some of the strongest connections with Darwin’s visit to the Galapagos than any place else. To get a sense of the impact that visiting this land forged by the fires from deep within the very bowels of the earth had on young Darwin, one just has to look at his published work on the Geological Observations made during the Voyage of the Beagle and note that although he spent just one day here of the five weeks he was in the islands, he devoted over a third of its pages (36 in total) to a description of Tagus Cove and Beagle Crater. 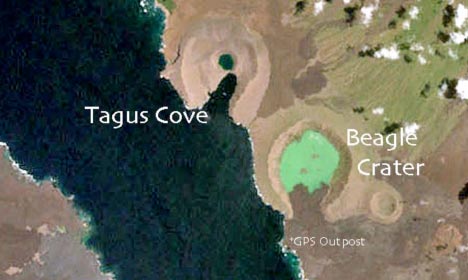 Writing in his Journal, Darwin made the following observations;

September 30th – After sun-set, came to an anchor in Banks cove (now called Tagus Cove) in Albemarle Island (Isabela) and which cove subsequently turned out to be the Crater of an old Volcano. 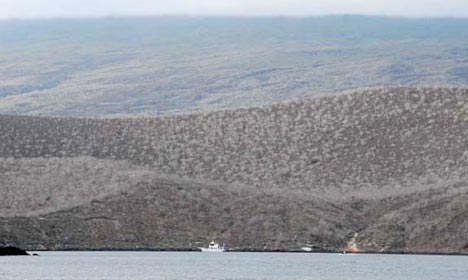 October 1st – To the South of the Cove I found a most beautiful Crater, elliptic in form, less than a mile in its longer axis & about 500 feet deep. Its bottom was occupied by a lake, out of which a tiny Crater formed an Island

The day was overpoweringly hot; and the lake looked blue and clear. I hurried down the cindery side (the northern flank), choked with dust, to my disgust on tasting the water found it Salt as brine. This crater and some other neighboring ones have only poured forth mud or Sandstone containing fragments of Volcanic rocks; but from the mountain behind, great bare streams have flowed, sometimes from the summit, or from small Craters on the side, expanding in their descent, have at the base formed plains of Lava.

Ever since coming aboard the Mabel last Sunday evening, I’ve either been walking the 50 by 15 foot space that had become our home, bobbing around under the blazing equatorial sun in a little inflatable dingy or when the opportunity presented itself, just below the surface of the water with fins, mask and snorkel, marveling at creatures the likes of which I had only ever imagined.  Because of the very strict conservation regulations that are enforced by the Galapagos National Park Service in order to try and limit the impact that the ever increasing tourist pressure would put on the islands and the animals and plants that inhabit them, most parts of the islands are completely off limits to visitors and for those locations designated as “tourist spots”, unescorted trips ashore are strictly forbidden and one must be accompanied by a certified Galapagos guide.  In fact, 95% of the Galapagos Islands are part of the Galapagos National Park.  However, both Stuart and the captain, knowing of my desire to try and step ashore in the very spot where Darwin had walked had an idea.  There was a tiny outpost station just to the south of Beagle Crater that was maintained by the Galapagos National Park Service (GPS) and the captain made contact with the station via the ship’s radio asking whether or not it might be possible for a few of us to come ashore and pay them a visit.  I don’t know whether the fact that three of the potential visitors were women had any influence on the four men who are stationed at this remote and completely isolated outpost for three long weeks but I’ll leave it to you to imagine my response when I learned that they would welcome the company and that we could land on the beach right in front of their station.

Later that morning after having completed two dives, the captain moved the Mabel to the south of Beagle Crater and moored just offshore from the outpost, a small wooden building perched high on what looked like an old volcanic cone.  Making the short trip from the Mabel to the beach in the panga was for me like taking a journey back in time and with one giant leap, I crossed the centuries just as the bow of the panga hit the black sand beach and there I was, ashore in Galapagos in the very place that Darwin and FitzRoy had visited and described so vividly so many years ago. 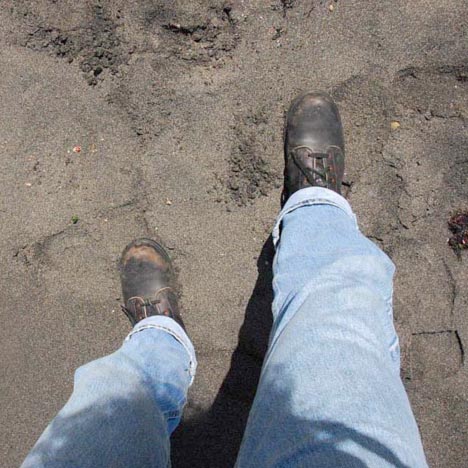 I guess that I was so wrapped up in my thoughts that I failed to notice the welcoming committee that had come down to the beach to greet us.

Walking up the incredibly steep trail that led from the beach to the outpost, I was aware that FitzRoy’s description written on 1 October 1835 could just as easily have been written today:

“The heat here is greater than in other parts of the archipelago, and the land is more sterile.”

Both statements were completely true and I found myself stopping at a few points along the climb to catch my breath and try and remember that the scorching, think vapor that was filling my lungs was actually good for me. Finally reaching the top of the little hill upon which the outpost was built, we were warmly greeted by the four men who manned the station, three members of the National Park Service and one who was attached to the Navy.

Walking around the building I noticed something that made my heart skip a beat — a giant satellite communications antenna. Not only did they have a satellite connection to the internet, somewhat tenuous as I was soon to find out, but that they would be very happy to allow me to try and upload a short journal entry along with a few photographs to update my Notes from the Field. I only wish that I knew the proper words in Spanish to thank them for their incredible generosity. After a number of false starts and frustrating dead ends, Nathalia came up with a suggestion that worked like a charm and I was immediately connected and managed to upload the journal without a problem. With that 21st century chore out of the way, it was time to journey back in time to the 19th century and pay a visit to the rim of Beagle Crater.

Aside from his words, copius as they may be, there is no record illustrating Darwin’s visit to Beagle Crater. In my case, I had a virtual band of paparazzi documenting my every move. After everyone had taken their pictures and seen everything they wanted to see, they turned their backs on the crater and stared back down towards the outpost.

I intentionally lingered behind, letting everyone make their way down the hill so that I could spend a few minutes alone thinking about what it must have been like on that brutally hot October day back in 1835 when a young man peered down into the very same lake and tried to make sense of all that he had seen on his voyage of discovery.

As for me, I took stock of where I was and what had led me to this place after all these years and felt incredibly thankful and recognized just how fortunate I have been.

Although Darwin’s description of this place has great scientific merit, I find myself drawn more to FitzRoy’s words;

“Passing a low projecting point, our eyes and imagination were engrossed by the strange wildness of the view; for in such a place Vulcan might have worked. Amidst the most confusedly heaped masses of lava, black and barren, as if hardly yet cooled, innumerable craters (or fumeroles) showed their very regular, even artificial looking heaps. It was like immense iron works, on a Cyclopian scale!

From a height near Tagus Cove, dismal indeed was the view, yet deeply interesting. To see such an extent of country overwhelmed by lava, to think of the possible effects of the seven dormant volcanoes then in sight, and to reflect that at some one period all was activity and dreadful combustion where we then witnessed only silent desolation, was very impressive.”

Before I close this journal I would like to extend a special thanks to the men of the Galapagos National Park Service outpost for their hospitality and for in so many ways, allowing me to walk a path that led me back to where it all began. Muchas Gracias. 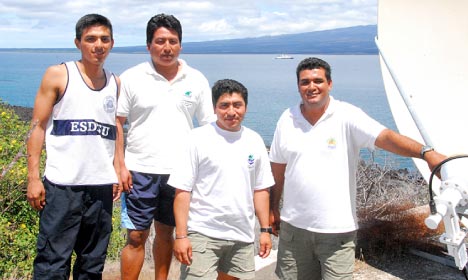 This entry was posted on Saturday, August 8th, 2009 at 12:00 pm and is filed under Journey to Galapagos. You can follow any responses to this entry through the RSS 2.0 feed. Both comments and pings are currently closed.