Thinking back on all of the things that have led up to my Journey to Galapagos, I would have never realized the impact that a simple one line e-mail would have. It all started with this note that I sent to Stuart Banks on the morning of 13 April 2009:

stuart,
were you guys on fire yesterday or is it another eruption?
gene

Hi Gene,
Eruption in Fernandina Island – lava reached the coast in just 1 day
(SW Cabo Hammond), so seems like a big one!
Stuart

Little could I imagine that in a little more three months time, I would be at that very spot sitting in a zodiac as Stuart and the dive team from the Charles Darwin Research Station went over the side and beneath into the depths in hopes of gazing at some of the newest land on Planet Earth.

I have to say that although I had become very familiar with those images of the eruption, they certainly did not prepare me for what it felt like to be actually steaming back and forth along that primordial coastline, a place whose description I have found none better than that written in 1835 by FitzRoy in his Journal of the Voyage of the Beagle:

“we then weighed [anchor], and continued our examination of this unearthly shore. Passing a low projecting point, our eyes and imagination were engrossed by the strange wildness of the view; for in such a place Vulcan might have worked. Amidst the most confusedly heaped masses of lava, black and barren, as if hardly yet cooled, innumerable craters (or fumeroles) showed their very regular, even artificial looking heaps. It was like immense iron works, on a Cyclopian scale!”

Although we had what was the exact location of the place where the lava entered the sea as provided to us by Godfrey Merlen (more on him in a bit), it was hard to discern exactly what might have been the most recent deposit amongst all the charred and jagged rubble that we could see along the coast.  The captain carefully guided the Mabel as close to the coast as he felt it safe to go and everyone was perched along the rail trying to pick out something that would indicate the recent lava flow.

However, there was one absolutely unique feature that repeatedly drew our attention as we passed back in forth in front of it and at first we thought that it might actually be an emerging flow of fresh lava since the color and texture seemed to indicate as much.  Curiously, what was missing was the steam that we assumed must accompany such an event and as much as we looked, we could not see even a wisp of smoke.  Unfortunately, there were no geologists on board so a more accurate identification of what this actually was will have to wait until we hear back from some of the geologists to whom we have passed along the photographs of this most perplexing feature. 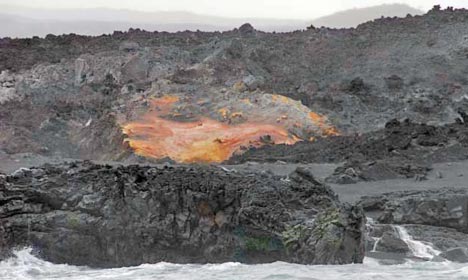 Using the coordinates that we had been given by Godfrey and our best read of the coastline, the dive teams decided on the location that they felt was most likely the site of the fresh lava flow and headed out in the pangas with me tagging along for the ride. Over they went but unlike previous dives where the teams would remain submerged for more than hour, they surfaced very soon and I’ll let Stuart fill in the details as to why:

“With a large swell crashing against the cliffs a quick check with the handheld depth sounder showed that the lava more than 2 months before had plunged straight off of the cliff carving it’s path into deep water – bringing our dive very close to the shore. One of the first things we noticed was a strange milky coloration in the water amid the normal deep blue that spread out from that point on the coast for more than 200m in each direction. Entering the milky water caught in the huge swell we headed down, yet could not see more than a meter in any direction.

People vanished from sight within seconds. Just 15ft down the little light piercing the cold water rapidly disappeared leaving a claustrophobic inky blanket through which we could see nothing, just relying upon our dive instruments. At 50ft the visibility was a little better — just enough to see some large slabs covered in quick recruiting barnacles, a turbid mulch of volcanic ash and rolling newly formed lava boulders loose in the powerful swell. Disorientated divers returned to the surface, rapidly picked up by our zodiacs in the surface surfing the waves. Future months will tell how the sea reclaims the new lava thrown into the ocean, yet on that morning, the lasting aftermath of the magma was still very evident.”

The fact that we had the we knew exactly where to look was because of a latitude and longitude that was written on a small sheet of paper and given to me by Godfrey Merlen who I had the pleasure of spending an afternoon with before we set sail on the M/V Queen Mabel.  Godfrey has been in Galapagos for nearly forty years and has seen so many changes over that time and unfortunately, many of them not all that positive.  Godfrey believes so strongly in the uniqueness of Galapagos and how crucial it is to protect these Islands for future generations and he is one of those rare people who can articulate in words what he feels in his heart in a way that not only can anyone understand but that is hard to refute. 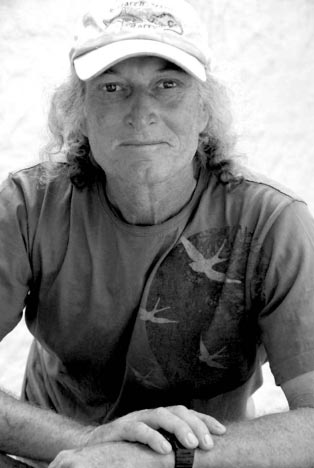 An online biography of Godfrey gives some of the basics:

He is a permanent resident of Galapagos and lives in Puerto Ayora on Santa Cruz Island. Mr. Merlen works closely with the Galapagos National Park Service and the Charles Darwin Research Station of which he is a general assembly member. He has published a number of articles and several books on the biology and conservation of the islands. Primarily trained in biology and farming, he has directed his attention to the marine environment and conservation matters. He is also a licensed boat captain and carries out marine mammal research in Ecuadorian waters.

While speaking with Godfrey I realized that he had so much to say that I wanted to be able to pass along that I asked whether or not it would be alright if I videotaped our conversation.  Thirty minutes later I had a tape of some wonderful stories about Galapagos and thoughts about its future.  I hope to be able to make that interview available as part of this journal once I return to the States.  However, I did ask Godfrey to summarize the work that he is currently involved with and here is what he wrote:

“In essence I am working at present on the reestablishment of the 1000km oceanic barrier that existed previous to mans arrival.  Without this barrier the future of the biodiversity of the Galapagos archipelago is bleak since the arrival of introduced organisms, including diseases, plants and animals (especially invertebrates) cause havoc in isolated oceanic islands. The work involves a hands on approach requiring meetings at high levels of government to generate dedicated support and legal frameworks, and the research and development of known technologies that can act as modern isolation mechanisms.  Through this process the outstanding biological qualities of Galapagos will be preserved and future generations can experience the enchantment of the islands as we do today.”

Godfrey was also kind enough to pass along a photograph showing him standing on the deck of his little ship Ratty as the newly erupted lava flowed into the sea just behind him on that day in April 2009 which clearly explains why he knew exactly where to send us.  In case you may think that Ratty is an odd name for a boat or that it refers to the condition of Godfrey’s vessel you’d be wrong on both counts.  The name comes from that classic 1909 children’s book by Kenneth Graham entitled “The Wind in the Willows” which has one of the truest lines ever written, “There is nothing — absolutely nothing — half so much worth doing as messing about in boats” 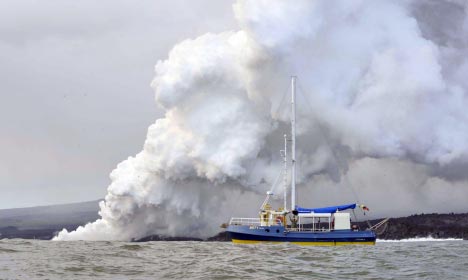 This entry was posted on Saturday, August 8th, 2009 at 3:00 pm and is filed under Journey to Galapagos. You can follow any responses to this entry through the RSS 2.0 feed. Both comments and pings are currently closed.

4 Responses to “Diving in Ash”