In this day of high speed computers, sophisticated satellite observation systems and the continuously connected world in which we do our science, it has been quite a eye opening and muscle straining experience to realize that people still do oceanographic research the old fashioned way — by hand! The ocean waters around the Galapagos teem with life and nowhere is the abundance of phytoplankton, those microscopic floating plants that form the base of the marine food web and essentially support all life in the oceans greater, than in the western part of the Archipelago, exactly where our cruise has taken us. Supported by the nutrient-rich upwelling of the eastward flowing Equatorial Undercurrent also known historically as the Cromwell Current, and as some believe, fertilized by the iron-rich micronutrients that these volcanic islands have in abundance, the waters between Fernandina and Isabela have some of the highest phytoplankton concentrations anywhere. The waters are literally green, more closely resembling a diluted pea soup than the deep blue ocean waters that most people associate with the open sea. 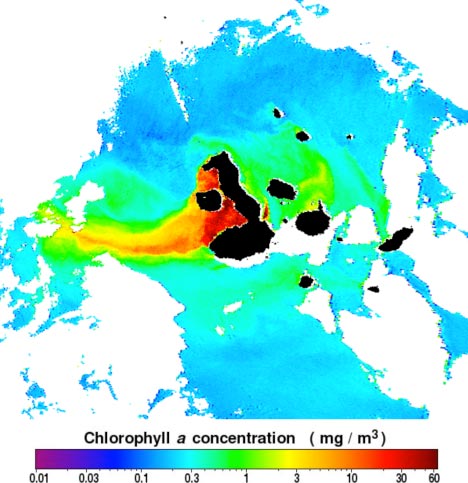 Feeding at this twenty four hour a day all you can eat buffet of phytoplankton, the tiny animals that form the next step in the marine food web, the zooplankton, are also so abundant that they can often be seen with the naked eye, especially the ones that seem to have swallowed little drops of phosphorescent paint in shades of green, blue, yellow and purple. As interesting as they may be to look at, to quantify the concentrations of these two critical components of the marine food web in this incredibly rich and dynamic system, we resort to an age old technique of dragging very fine mesh nets through the water and seeing what we catch. Since this work is done from one of the little inflatable pangas, it means that everything has to be done by hand which is not too bad when letting out the several hundred feet of rope tied to the end of the two plankton nets that we use. However, when it comes time to haul the nets back to the boat, what you have at the end of a very long rope is essentially a giant bag filled with very heavy water. 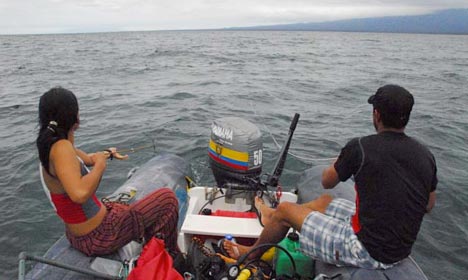 To catch both the phytoplankton and zooplankton we use two different nets, one tied off to each side of the panga, one a very fine mesh net that is designed specifically to trap the microscopic phytoplankton near the surface and the other has a little bit larger mesh that will let the phytoplankton pass through but catch the larger zooplankton as it is pulled through the water. Whatever organisms do not pass through the mesh are trapped at the end of the net and ultimately end up in a little mesh-lined bottle. 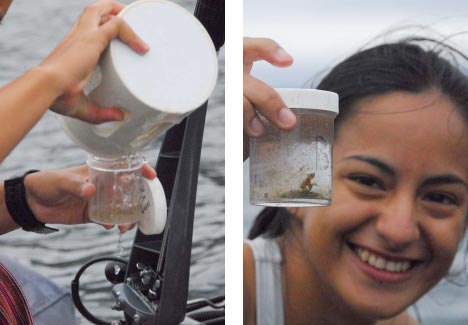 The differences between the contents of the two nets, both having been pulled at a depth of one meter for ten minutes is really quite remarkable. The water from the larger meshed net was essentially crystal clear except that it was filled with all sorts of incredible looking creatures, many of them eagerly swimming around in their little plastic bottle. There were at least a few larvae fish and many shrimp-like zooplankton with large black eyes that jerked their way through the water as they contracted their bodies in the unfamiliar surroundings.  The smaller meshed yielded a chlorophyll-a rich phytoplankton filled jar that was impossible to see through and thankfully for those of us who have made a career of it, reaffirms the basic premise behind all ocean color remote sensing — that the color of the ocean is largely determined by the concentration of phytoplankton in the near-surface waters and this color can be detected from space. I can’t wait to get back to shore and see what SeaWiFS “saw” as it flew over the Galapagos today at the same time that we were pulling our nets through the water, 700 kilometers below.

This entry was posted on Monday, August 3rd, 2009 at 3:22 pm and is filed under Journey to Galapagos. You can follow any responses to this entry through the RSS 2.0 feed. Both comments and pings are currently closed.