For those of you who are chronologically oriented, here is a summary of our week at sea aboard the M/V Queen Mabel as she explored the western part of the Galapagos Archipelago. Below is a map showing the complete cruise track with the general areas that we visited outlined and below that are the detailed locations of each of the dive sites and where we anchored for the night (A): 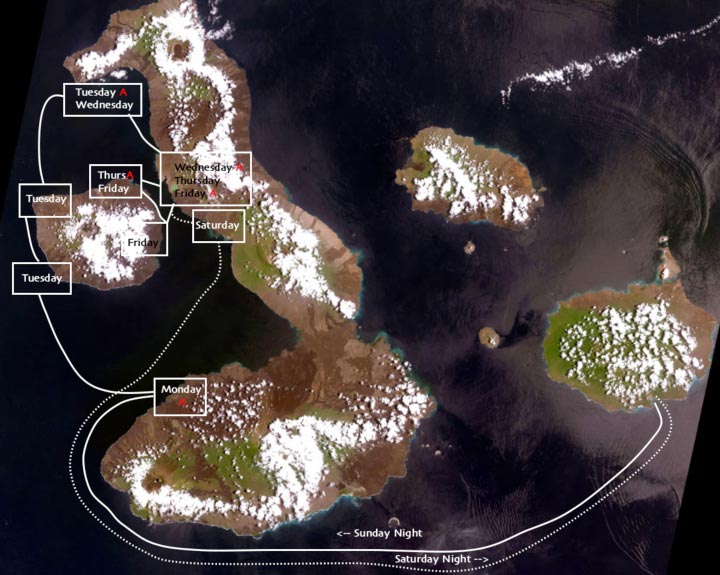 Loaded the boat at 8:00 am
Boarded at 6:00 pm
Underway at 7:00 pm
Steamed through the night reaching Punta Morena on Isabela Island first thing on Monday morning.

Six dives around Punta Morena, one plankton tow and CTD cast and anchored for the night. [Editor’s note: A “CTD” is a device that measures Conductivity, Temperature, and Depth of sea water. Salts dissolved in water conduct electricity.] 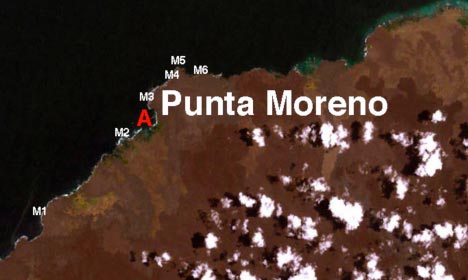 Left the anchorage in Punta Moreno just as the sun came up and steamed over to Fernandina where the team made one dive on the location of a recent volcanic eruption to see whether or not the new lava flows had begun to be colonized. The combination of wind, waves and strong currents made the dive very difficult and potentially quite dangerous. 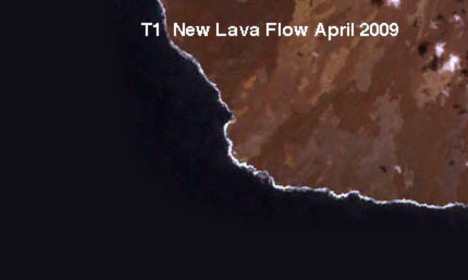 Headed around the northwest tip of Fernandina and stopped for a while where I had a chance to snorkel and John Morrison filmed among other things, a marine iguana grazing on an underwater algae bed.

Steamed northward across to the tip of Isabela Island, just two nautical miles south of the Equator and the team made two more dives before anchoring for the night in the shelter of cove completely surrounded by the towering cliffs of Punta Vicente Roca. 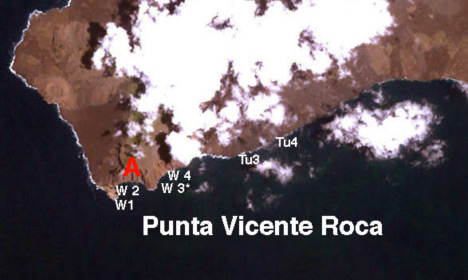 The team made four additional dives in the morning around Punta Vicente Roca, and then headed southeast across Banks Bay and made two more dives at the northern end of the Isabela side of Canal Bolivar before anchoring for the night in the protected waters of Tagus Cove 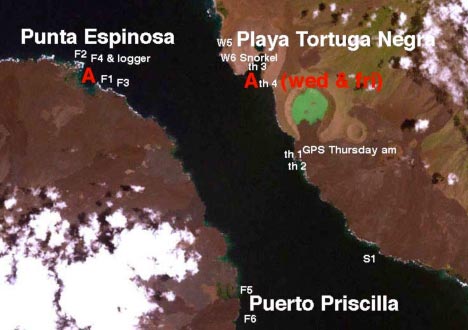 Left the shelter of Tagus Cove as the sun came up and the team made two dives south of Beagle Crater and then moored at the outpost of the Galapagos National Park Service and paid the four men who man the station a visit and was able to use their satellite internet connection to upload a journal. Brought the Park Service folks back to the boat for lunch after which they returned to their outpost for the remainder of their three week stay and we headed back toward Tagus Cove for two more dives and a plankton tow and CTD cast at the head of the cove in 190 feet of water. Headed back over to Fernandina and anchored for the night among the mangroves of Punta Espinosa.

The team made four dives around Punta Espinosa and retrieved two of the temperature loggers that had been in place for the past year and replaced them with two new ones.  Headed back across Canal Bolivar and anchored once again for our last night in Tagus Cove.

Left Tagus Cove at first light and steamed south through Canal Bolivar where Stuart and the rest of the team celebrated his birthday with an early morning dive in the ice cold waters of Los Cañones. After the team showered and had breakfast, the Captain pushed the throttle to the stops and we headed south into the rolling equatorial swell back towards Academy Bay.

Arrived in Academy Bay at 4:43 am and tied the M/V Queen Mabel to her mooring. 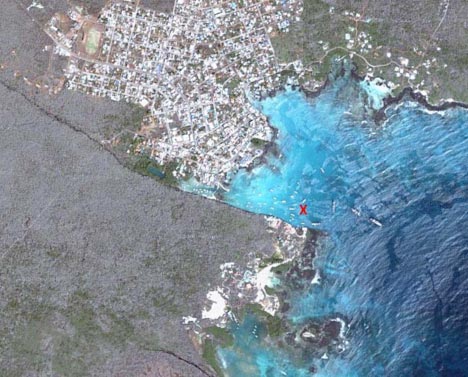 This entry was posted on Monday, August 3rd, 2009 at 4:00 pm and is filed under Journey to Galapagos. You can follow any responses to this entry through the RSS 2.0 feed. Both comments and pings are currently closed.