I have just learned that there is a chance that I may get to go ashore this morning just south of Tagus Cove and Beagle Crater and hike up to the rim where there is a small outpost station manned by a couple of members of the Galapagos National Park Service. I am not sure exactly how they are going to feel about an oceanographer from NASA who doesn’t speak a word of Spanish knocking on their door asking if he could possibly “borrow” their internet connection for a few minutes to send a message back to the Earth Observatory for his “Notes from the Field” but I figure that it may just be a strange enough request that they may actually allow me to do it. If so, rather than completely swamp their network by trying to transfer the nearly 1,000 photographs that I have taken since leaving Academy Bay on Sunday evening, I’ve decided that I would like to take this unexpected opportunity to introduce the incredible people who I have had the absolute pleasure of sharing this little 50 x 15 foot floating assemblage of wood that is our home for the week as we explore the Encantadas – the Enchanted Isles of Galapagos.

Hopefully, you’ll hear more from these folks through their own words once we return to Academy Bay and I have a chance to send in some of the journals that they have been kind enough to write but for now, I’ll just let some of the photos that I have taken and the very briefest of descriptions stand on their own. Just let me say that a person could not ask for better shipmates than these wonderful and generous folks and I feel incredibly fortunate to have been given this remarkable opportunity to share this adventure in the company of such a amazing group of people. 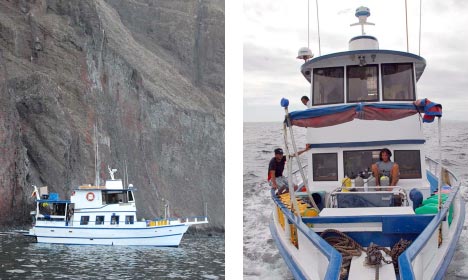 “From a height near Tagus Cove, dismal indeed was the view, yet deeply interesting. To see such an extent of country overwhelmed by lava, to think of the possible effects of the seven dormant volcanoes then in sight, and to reflect that at some one period all was activity and dreadful combustion where we then witnessed only silent desolation, was very impressive.”

“To the South of the Cove I found a most beautiful Crater, elliptic in form, less than a mile in its longer axis & about 500 feet deep. Its bottom was occupied by a lake, out of which a tiny Crater formed an Island. The day was overpoweringly hot; & the lake looked blue & clear. I hurried down the cindery side, choked with dust, to my disgust on tasting the water found it Salt as brine. This crater & some other neighbouring ones have only poured forth mud or Sandstone containing fragments of Volcanic rocks; but from the mountain behind, great bare streams have flowed, sometimes from the summit, or from small Craters on the side, expanding in their descent, have at the base formed plains of Lava.” 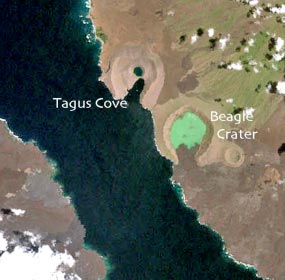 This entry was posted on Thursday, July 30th, 2009 at 3:30 pm and is filed under Journey to Galapagos. You can follow any responses to this entry through the RSS 2.0 feed. Both comments and pings are currently closed.