O, God Thy Sea Is So Great And My Boat Is So Small

Prayer of the Breton fisherman

I am certainly no stranger to boats. I have wrestled sharks with a half naked Samoan fisherman in a leaky outrigger canoe in the middle of the Pacific Ocean, stood on the crosstrees of the mainmast, 130 feet above the deck, of the wooden tall ship HMS Rose (the boat that was later to be used in the film Master and Commander) as we sailed her from Miami to New York City, spent two weeks with Bob Ballard aboard the deep sea submersible Alvin’s mother ship, the Atlantis, while the ROV Jason explored the hydrothermal vents a mile below in the Sea of Cortez, and was even lucky enough to have spent time underwater aboard the U.S. Navy’s smallest nuclear research submarine, the NR-1. However, for some reason, all indications are that the boat that will be taking us out to the western part of the Galapagos Archipelago is somewhat “unique”.

When I first learned that I would be joining the scientists from the Charles Darwin Research Station on a week-long biodiversity sampling cruise, I was told that we would be using the Galapagos National Park Service’s vessel, the Sierra Negra, the ship that has been used for all the surveys conducted under the NASA Biodiversity and Ecosystem Monitoring Program, as was described in an earlier journal by my colleague, Professor John Morrison.

While not overly large by oceanographic research vessel standards, she certainly seemed quite the robust little ship and even has a helicopter landing pad built into her superstructure and a wonderfully large after deck from which to conduct any of the oceanographic sampling that might be required.

However, upon arriving in the islands I was informed that we would not be going out on the Sierra Negra but rather, would be making the 15-meter M/V Queen Mabel, our home for the journey to the islands of Isabella and Fernandina — location of some of the most rugged and exposed stretches of coastline in the entire Archipelago. I figured that these folks must certainly know what they were doing and in fact, the Queen Mabel had been used over the years for a number of research cruises by many scientists from the Darwin Station. Hearing this, I decided to try and find out as much as I possibly could about our soon to be home, and during my first week in Galapagos asked every scientist at the Symposium and resident that I could find that had any experience with the Queen Mabel. Most of the comments were quite simple, short and very direct — “she’s cozy”, “she’s funky”, “she’s quite cramped”, “she’s a bit top heavy”, “ahhhhh, the mabel!” along with some silent rolling of eyes and thankfully at least one that said, “the crew and the food are great”. However, there was one comment that struck with me — “well, she wasn’t quite as terrible as I had expected”.

With that glowing recommendation, I decided to search the web and see if I could possibly find any additional information and perhaps a photograph of my soon to be home. Unfortunately, the one picture that I found just had to be of a different Mabel since there was no way that the boat pictured on the website could be capable of carrying a scientific party of eleven plus three crew. No way.

On the last night of the Symposium, the Darwin Foundation hosted a closing ceremony at one of the local restaurants which because of its location out on the point, required people to take one of the water taxis that run back and forth across Academy Bay. Hopping aboard the water taxi we cruised past one beautifully appointed tour boat after another until just as we were approaching the restaurant’s dock, we came alongside a rather small, very aerodynamically unique vessel that looked somewhat familiar. Peering through the darkness I was just able to make out the little ship’s name — the M/V Queen Mabel. 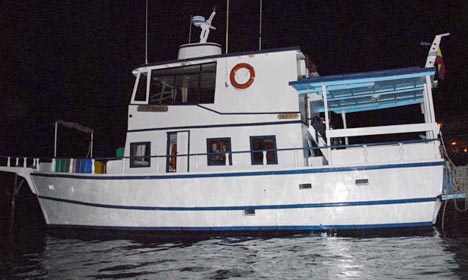 Assuming that the darkness might have been playing tricks on me and made the boat look much smaller than she really was because I was not able to see her alongside some of the other boats, I was determined to return to the harbor the first thing the next morning and try and get a better look at the boat.  Looking across the harbor I was once again impressed by the number of large, very well outfitted tour boats and for the life of me could not see any boat that resembled the one that I had seen the night before, Just as I was ready to admit that I must have been hallucinating, the wind shifted and there, behind one of the elegant sailing yachts appeared the Mabel. It was a classic case of the Goldilocks syndrome with a slight twist. One boat was very big, one boat was just right and then the one boat that looked way too small was the Queen Mabel. 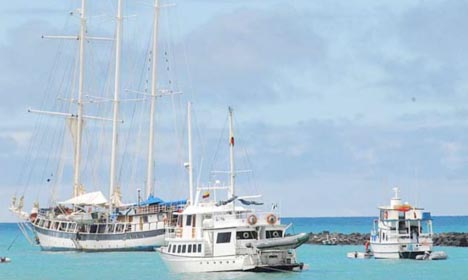 However, I really have no reason to complain or be apprehensive because since so much of the motivation behind my visit to Galapagos was to try and follow in Darwin’s footsteps and in the Beagle‘s wake, I was most comforted to remember that Darwin in his early letters, before he actually set sail on the Beagle, repeatedly lamented the incredibly small size of the Beagle (she was approximately 90 feet in length), and on the even smaller size of his accommodations. In a letter to his sister on 14 Sept 1831, Darwin wrote;

The vessel is a very small one; three masted; & carrying 10 guns: but everybody says it is the best sort for our work, and of its class it is an excellent vessel: new, but well tried, and one half again the usual strength. — The want of room is very bad, but we must make the best of it.

My objection to the vessel is its smallness, which cramps one so for room for packing my own body & all my cases &c &c. — As to its safety I hope the Admiralty are the best judges; to a landsmans eye she looks very small. — She is a 10 gun 3 masted brig. — but I believe an excellent vessel. —

While still waiting for the ship to be outfitted and made ready to sail, he wrote to another friend on 30 Oct 1831;

But the corner of the cabin, which is my private property, is most woefully small. — I have just room to turn round and that is all.

While the Beagle was originally scheduled to set sail in late September 1831, one delay after another began to wear on young Darwin as one scheduled sailing day slipped into another while the Beagle waited for the wind to swing around from the southwest to the northeast, which would allow them to leave the coast and set out into the Atlantic. An optimistic Darwin wrote to his friend, Henslow, on 15 Nov 1831;

The orders are come down from the Admiralty and every thing is finally settled.– We positively sail the last day of this month and I think before that time the Vessel will be ready.– She looks most beautiful, even a landsman must admire her. We all think her the most perfect vessel ever turned out of the Dock yard.– one thing is certain no vessel has been fitted out so expensively and with so much care.–

The absolute want of room is an evil, that nothing can surmount.– I think L Jenyns did very wisely in not coming:, that is, judging from my own feelings, for I am sure if I had left College some few years, or been those years older, I never could have endured it.

Time in port had obviously started to wear on Darwin as he wrote again to Henslow on 3 Dec 1831;

It is now late in the evening, and tonight I am going to sleep on board.– On Monday we most certainly sail, so you may guess in what a desperate state of confusion we are all in… I look forward even to sea sickness with something like satisfaction, anything must be better than this state of anxiety.

But it was not to be. One thing or another prevented the Beagle from leaving port until finally, on December 27th 1831, all sails were set and the Beagle left port to return nearly five years later after a voyage that would forever change the way we viewed our place in the natural world. And as for Darwin, he got his wish and was sick beyond all measure for the first weeks of the voyage. He recorded not a single word in his diary from the time the lines were cast off on the 27th of December until the 5th of January when he wrote;

I am now on the 5th of Jan. writing the memoranda of my misery for the last week. A beautiful day, accompanied by the long wished for east wind. – Weighed anchor at 11 o’clock and with difficulty tacked out… with every sail filled by a light breeze we scudded away at the rate of 7 or 8 knots an hour. — I was not sick that evening but went to bed early. —

Waked in the morning with an eight knot per hour wind, & soon became sick & remained so during the whole day.

I will now give all the dear bought experience I have gained about sea-sickness. — In first place the misery is excessive and far exceeds what a person would suppose who had never been at sea more than a few days. — I found the only relief to be in a horizontal position: but that it must never be forgotten the more you combat with the enemy the sooner will he yield. I found in the only thing my stomach would bear was biscuit and raisins: but of this as I became more exhausted I soon grew tired and then the sovereign remedy is Sago, with wine and spice and made very hot. — But the only sure thing is lying down, and if in a hammock so much the better.

Though sick as a dog, on the 30th of December Darwin did manage to make his way on deck and recorded his very first observations of the voyage, a comment about the color of the ocean which I must admit I found to be particularly meaningful and significant;

I staggered for a few minutes on deck and was much struck by the appearance of the sea. The deep water differs as much from that near shore, as an inland lake does from a little pool. — It is not only the darkness of the blue, but the brilliancy of its tint when contrasted with the white curling tip that gives such a novel beauty to the scene. — I have seen paintings that give a faithful idea of it. 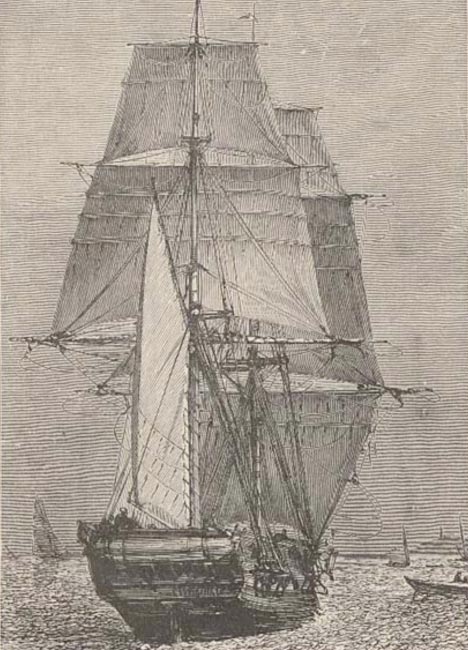 And so the Voyage of the Beagle began…

This entry was posted on Sunday, July 26th, 2009 at 3:45 pm and is filed under Journey to Galapagos. You can follow any responses to this entry through the RSS 2.0 feed. Both comments and pings are currently closed.

4 Responses to “O, God Thy Sea Is So Great And My Boat Is So Small”