A few red leather bound notebooks, some loose sheets of fine paper, a quill pen and an inkwell were all that Darwin required to keep his family, friends and colleagues informed as to the people, places and things that he was encountering during the five years that he was on the Beagle.  However, although Darwin was a prolific writer and quite religious in keeping up with his correspondence as the events took place, it often took months for a letter to reach its intended recipient back in England and an even longer and often less certain chance of letters from home finding Darwin. 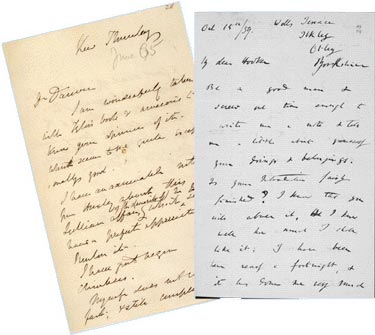 Letters Darwin wrote from the Beagle.

For sailors aboard vessels of the early 19th century, the most likely “post office” that they could hope for would be other ships that they might encounter on the high seas who, if they were lucky, might be headed in the direction that their letters were intended to go.  Ships would often come alongside each other and trade news of the world, and once learning in which direction the other was heading, might pass off a bundle of letters to be posted whenever the ship reached port.  This often made for an uneven and quite often, out of sequence arrival of letters leaving the folks at home sometimes puzzled as to the events that might be alluded to in a recently received letter but had yet to be explained because the letter describing the event had not yet arrived.

For letters from home to reach Darwin, the writer would have a vague idea of what port the Beagle may be headed towards and when they might be likely to arrive, and the letters would be posted in hopes of arriving before the Beagle.  With the uncertainty of winds to drive the ship—remember, this was long before boats had any mechanical means of propulsion and therefore relied solely on the wind to get where they needed to go—and the nature of their surveying expedition, a well kept schedule of arrival in port was almost impossible.  Consequently, many of the letters written to Darwin must have gone astray or arrived after the Beagle had already left port.  There are numerous letters from Darwin informing the folks at home of changes to their plans and telling them where to send their next batch of letters.

The Beagle’s Captain FitzRoy wrote in his journal about one of the more unusual methods of sending letters home that they encountered in the Galapagos on Charles Island, now named Floreana, in a place appropriately named Post-Office Bay:

September 24th 1835: Post-Office Bay is sheltered, easy of access, has excellent anchorage, and only wants fresh-water to make it a most desirable harbour for shipping. Its name is the result of a custom established by the whalers: a box was placed on a post, to receive letters, and homeward-bound ships examined the directions, taking with them all which they might have means of forwarding; but since the island has been peopled the box has been empty, for letters are now left at the settlement.

Then as now, it was unthinkable to actually read the letters that were placed in the boxes beyond looking at the address to which the letters were meant to be delivered.  However, in an early example of the lengths to which the government may go to in times of war to gather information,  a U.S. Navy captain by the name of David Porter during the War of 1812 between the United States and Britain, intercepted letters placed in the barrel by British sailors.  By carefully studying the messages intended for loved ones back in England, this information allowed Porter to capture more than 1 million tons of British shipping cargo.

Porter’s writes in his “Journal of a Cruise made to the Pacific Ocean…”:

“…understanding that vessels which stopped there for refreshments, such as turtle and land tortoise, and for wood, were in the practice of depositing letters in a box placed for the purpose near the landing-place, (which is a small beach sheltered by rocks, about the middle of the bay,) I despatched lieutenant Downes to ascertain if any vessels had been lately there, and to bring off such letters as might be of use to us, if he should find any. He returned in about three hours, with several papers, taken from a box which he found nailed to a post, over which was a black sign, on which was painted Hathaway’s Post Office… From those papers I obtained information, that in June last, the following British whale-ships had put in there, on their way to the island of Albemarle, where they generally cruise for a year at a time, and some for even a longer period…”

Communications these days are very different, and rather than looking for a barrel nailed to a tree to pass messages back and forth, I am much more likely to look for an available WiFi signal that will allow me to instantly send and receive letters, photos and videos.  In fact, on my very last day in the office, I arranged to have letters of a very unusual sort sent to me on a regular basis.  Through a service that NASA provides to any researcher, anywhere in the world, it is possible to request daily satellite coverage of your particular region of interest and to have that data processed and mapped to your own specifications and if desired, have the resulting images e-mailed to the investigator, even if that investigator happens to be on a boat at sea or on a remote volcanic island in the Pacific. 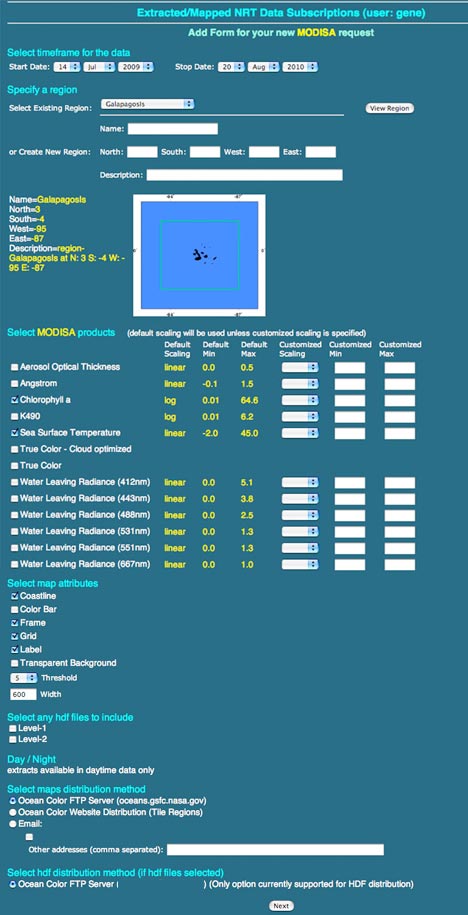 Screenshot from the satellite data request system that delivers daily images and data from the Galapagos.

In my case, I am receiving daily maps of phytoplankton chlorophyll-a concentrations, sea surface temperature readings and true-color images acquired by the SeaWiFS and MODIS instruments orbiting 700 kilometers above the Earth.  It is my hope that these images will help to not only guide the surveys that we might do aboard the research cruise but to help interpret the data that we collect.  It’s an amazing feeling to open up my in-box each morning and realize that I’ve got mail – FROM SPACE!

This entry was posted on Monday, July 20th, 2009 at 7:00 pm and is filed under Journey to Galapagos. You can follow any responses to this entry through the RSS 2.0 feed. Both comments and pings are currently closed.

4 Responses to “You’ve got Mail”