As noted in a recent Image of the Day (“A Fiery Month in Zulia”) satellites have detected lots of fire activity in western Venezuela in recent weeks. Just as we were finishing that story, a surprisingly large, dark smoke plume appeared in VIIRS and MODIS imagery. It bore little resemblance to the smaller, gray plumes that we had been watching. Forest and crops fires had caused the earlier plumes; the new black smoke was caused by a brush fire that had spread into a crude oil storage area, according to news reports.

The animation above shows the progression of the plume on the morning of April 25, 2020. The images were collected at 10 minute intervals by the Advanced Baseline Imager (ABI) on NOAA’s GOES-16 satellite. Sensors on other satellites caught glimpses of the short-lived plume as well, including the Multispectral Instrument (MSI) on the European Space Agency’s Sentinel-2 satellite and the Ozone Monitoring Instrument (OMI) on NASA’s Aura satellite.

With dozens of firefighters battling the blaze, it was extinguished by the next day. On April 26, 2020, there were no signs of smoke or active fires visible in MODIS and VIIRS images of that area.

Tweeting the Extreme Summer Down Under

Baked by heat and drought, deluged by rain and floods, scorched by wildfire, and blanketed by dust, Australia has faced several months of extreme weather.

Some of the latest jaw-dropping images come from NASA astronaut Christina Koch. “Australia. Our hearts and thoughts are with you,” she tweeted, along with images of a massive dust storm making its way across the continent and smoke streaming from bushfires in southeastern Australia.

Meanwhile, Jean-Paul Vernier, a senior scientist at the National Institute of Aerospace at NASA Langley Research Center and the lead of a NASA disasters team responding to the fires, has been using data from the CALIPSO satellite to measure something impossible to discern from an aerial photograph, even one taken from space—the height of the smoke. As we reported earlier, the fires are so intense that they have lifted smoke all the way to the stratosphere, something wildfires do only occasionally. (Usually, volcanoes lift plumes to such heights.)

“The radiative heating from the soot particles within the smoke makes wildfire plumes particularly buoyant, meaning they will reach higher altitudes in the stratosphere and stay there longer than material from a volcanic eruption that reaches the same initial altitude,” Vernier explained. 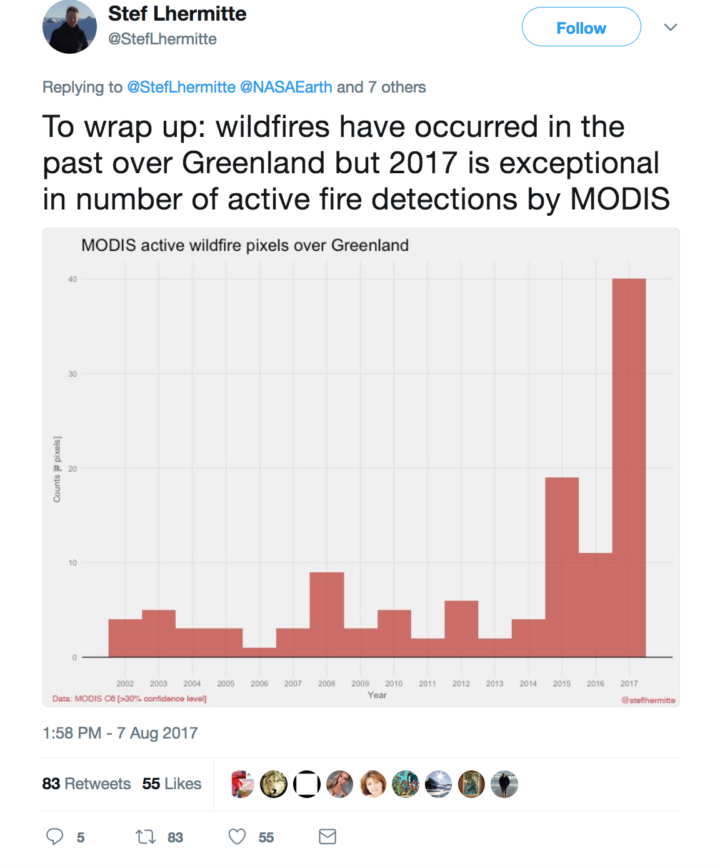