Where on Earth quiz #27 – answered

For those of you who played geographical detective with the MISR image quiz, here are this month’s clues and answers:

1) Within this country lies a picturesque desert, located at the bottom right of the image. This desert was home to a group of enigmatic ancient people who were known for their skill and resourcefulness. Their capital is a UNESCO World Heritage Site. Name the desert and the given name of the people.

The Rum Desert or Wadi Rum, and the people are the Nabateans.

2) The wavy lines that cross the middle of the image are natural geologic features that often carry descriptive names of their location. What is the native word used to accurately describe these features?

The native word is the Arabic word for valley: Wadi.

The body of water is the Dead Sea.

4) At the bottom left, small city developments are visible. One of those cities came was developed at the beginning of the 20th century. It now accounts for 50 percent of the industrial output of the country. Name the city.

The city is Zarqa.

5) The landscape dominating most of the image is an extension of a much larger, natural feature. This feature is home to a very limited floristic diversity and to a number of critical and endangered species—though there are no formally protected areas. Name this feature.

It is the Arabian Desert.

6) Name the country that fills most of the area in this image.

Nearly 250 people from around the world responded before the deadline. Individuals who answered all questions correctly are listed below in the order in which responses were received. The prize winners are indicated by an asterisk. Well done to all and thank you for participating!

Where on Earth, round 2

We had fun with last month’s “Where on Earth” mystery, so we thought we’d throw a new image out for your guessing pleasure. 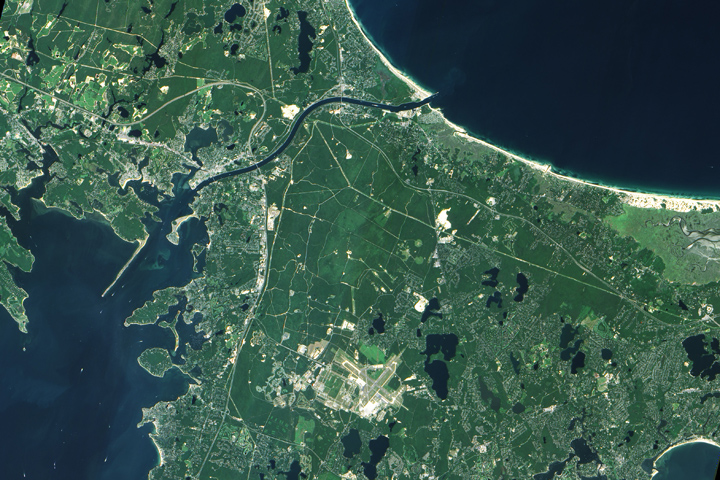 + The ponds in the image were formed by retreating glaciers…

+ The main waterway in the image is partly man-made…

+ Down the road, a famous stretch of parkland just celebrated its 50th anniversary…

We are a bit short on prizes — and federal laws keep us from offering much beyond our admiration. But after all, success is its own reward.

Where on Earth? Revealed

On July 29, the Earth Observatory posted an image (above) from the MISR Mystery Image contest. How did you do? Did you guess South Africa? The image is rotated so that north is in the lower right. Visible as a cement-colored grid at this distance, Cape Town sits at the head of the U-shaped bay, called False Bay.

The MISR team revealed the image location and answers to the associated trivia quiz on their web page. More than 470 people from all over the world entered the contest. Congratulations to the winners!