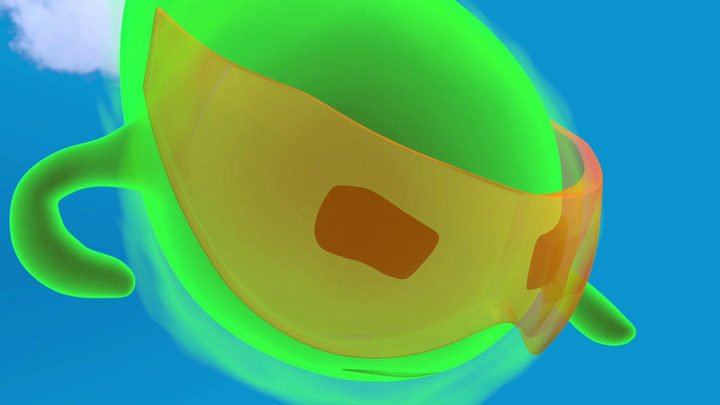 “Pho,” a cartoon character representing a photon of light from ICESat-2, illustrates how the science mission works. Watch the video here. Credit: NASA/Goddard/Savannah College of Art and Design et al.

The successful launch of a satellite is an exciting step for the scientists and engineers who have spent years dedicated to a mission. But there are still many more boxes to be checked, and anticipation builds as a satellite’s instruments are turned on and they produce what scientists call “first light” — the first time a satellite opens its “eyes” and delivers preliminary images or data.

After the successful launch of NASA’s Ice, Cloud, and land Elevation Satellite-2 (ICESat-2) on September 15, 2018, “first light” was not a natural-color image of Earth like those that come from satellites such as Terra, Aqua, or Landsat. Rather, the satellite’s sole instrument—the Advanced Topographic Laser Altimeter System (ATLAS)—acquired measurements of surface elevation. The laser fired for the first time on September 30, and returned its first height measurements from across the Antarctic ice sheet on October 3.

This visualization of ICESat-2 data shows the first set of height measurements from the satellite as it orbited over the Antarctic ice sheet. Credit: NASA’s Goddard Space Flight Center

This elevation measurement, acquired on October 3, shows the height of the Antarctic ice sheet along a path starting in East Antarctica, passing close to the South Pole, and ending in West Antarctica. As explained in a NASA story about the measurement:

“When scientists analyze the preliminary ICESat-2 data, they examine what is called a “photon cloud,” or a plot of each photon that ATLAS detects. Many of the points on a photon cloud are from background photons — natural sunlight reflected off Earth in the exact same wavelength as the laser photons. But with the help of computer programs that analyze the data, scientists can extract the signal from the noise and identify height of the ground below.”

These charts show the first photon returns from the instrument’s six beams as the satellite orbited over Antarctica. The green lines represent the number of photons detected. The X axis indicates the amount of time it took the photons to get from the satellite to the ground and back again. Credit: Megan Bock/NASA’s Goddard Space Flight Center.

Donya Douglas-Bradshaw, the project manager for the ATLAS instrument, said in the NASA story:

“We were all waiting with bated breath for the lasers to turn on and to see those first photons return. Seeing everything work together in concert is incredibly exciting. There are a lot of moving parts and this is the demonstration that it’s all working together.”

This entry was posted on Friday, October 5th, 2018 at 1:44 pm and is filed under Image Highlight. You can follow any responses to this entry through the RSS 2.0 feed. Both comments and pings are currently closed.