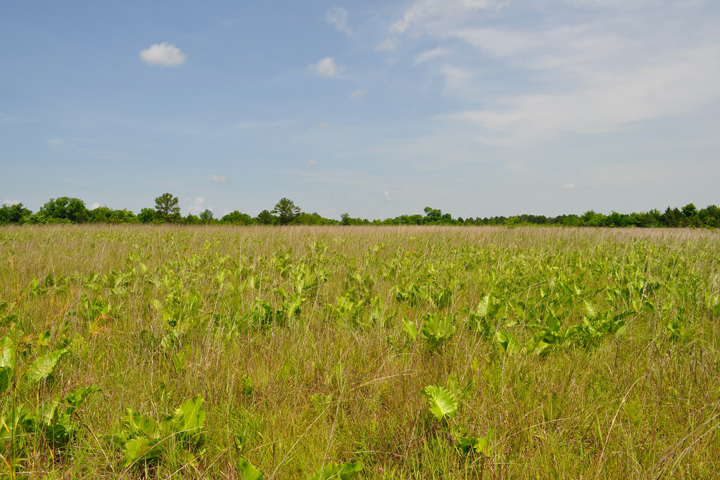 This month we published a satellite image and map of the southern United States featuring the Black Belt Prairie—a crescent-shaped swath of land running through Mississippi and Alabama named for its characteristically dark, fertile soil. Most of the fertile soils are cultivated, contrasting sharply with adjacent forested areas.

Grassland expert JoVonn Hill of Mississippi State University noted that in the 1830s, the Black Belt contained about 356,000 acres of prairie. Today, less than 1 percent of prairie land remains. One such prairie remnant is the Pulliam Prairie in Chickasaw County, Mississippi. Hill snapped this photograph (top image) of native grassland within the Pulliam Prairie, which in total spans about 250 acres. That’s a decent size for Black Belt prairie remnants, most of which span just 5-20 acres.

Pulliam Prairie is one of the most significant prairie remnants in Mississippi, given its large area and the diversity of species found there. Black Belt prairie remnants dot the landscape in Alabama too, all of which are important sites for the supporting an array of native vegetation and habitat. As Hill noted in our initial story about the region: “Find a remnant of the Black Belt prairie, and you could see some of its unique grassland birds; more than 200 species of plants, 1,000 species of moths, 107 species of bees, 33 species of grasshoppers, and 53 species of ants.”

This entry was posted on Thursday, June 21st, 2018 at 4:19 pm and is filed under Ground to Space. You can follow any responses to this entry through the RSS 2.0 feed. Both comments and pings are currently closed.