Spring Has Sprung in the Arctic Ocean 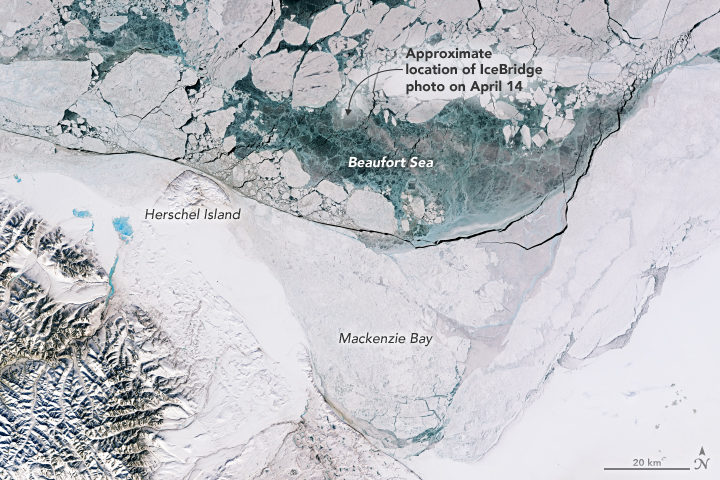 With springtime comes sunlight and warmth that advance the melting and breakup of Arctic sea ice. Varied patterns and textures appear across the icescape, and many are visible in this image, which was our Image of the Day on April 30. This satellite image includes the area photographed a day earlier by Operation IceBridge—the same photograph that sparked discussion on our blog and on news and social media about what might have caused the holes in the ice.

The holes were not a research focus of the mission; scientists were flying that day to measure the thickness of sea ice. Rather, as some scientists explain below, the holes were simply a sign of spring, and just one of the many interesting and photogenic sights seen from the aircraft in 10 years of research flights over the Arctic.

Nathan Kurtz, IceBridge project scientist
“The main purpose of these IceBridge flights is to measure the thickness of the sea ice. Ice thickness is an important factor which allows us to assess the health of the pack and its ability to survive the summer melt. It is also an important regulator in the exchange of energy and moisture between the ocean and the atmosphere.”

“While on the flights, I’ll stare out the windows for hours looking at the surface. The movement of the ice leads to huge variability over small scales, with many interesting scenes and patterns visible and a variety of color shades. But there’s only so much that can be discerned with human eyes. That is why we have the sensitive instrument suite on the plane: to map the intricacies of the ice cover which may otherwise be invisible to us and to quantify parameters for scientific interpretation.”

Chris Shuman, UMBC glaciologist based at NASA’s Goddard Space Flight Center
“Well back into March, satellites show a whole series of relatively clear images over Mackenzie Bay, indicating lots of sunshine coming in. The ‘holes’ in the sea ice are just a sign of spring, augmented by some particular process—‘submarine groundwater discharge,’ large mammals, algae growth, brine pockets draining, or something else entirely. Attributing any particular area of open water to a particular process is speculation. There is always a lot going on in the spring sea ice pack of the Beaufort Sea.”

John Sonntag, IceBridge mission scientist
“As scientists, we have the privilege of witnessing the beauty and mystery of the cryosphere firsthand, even as we work to collect that data. The Beaufort “ice circles” were among those. We have heard a number of plausible explanations for those fascinating features. In a more personal sense, I have been genuinely gratified to see the high level of interest from the public in the ice circles. The public’s clear enthusiasm for the puzzles of nature matches my own. It’s why I like my job!”

This entry was posted on Wednesday, May 2nd, 2018 at 11:52 am and is filed under Ice. You can follow any responses to this entry through the RSS 2.0 feed. Both comments and pings are currently closed.