What A Wonderful World: Pinacate Peaks

In this satellite image, the prominent Pinacate Peaks stick out above the sand dune landscape of the Gran Desierto de Altar in Mexico’s Sonoran Province. The peaks are located just south of the Mexico-United States border. The Gran Desierto de Altar is one section of the broader Soronan Desert which covers much of northwestern Mexico and reaches into Arizona and California. 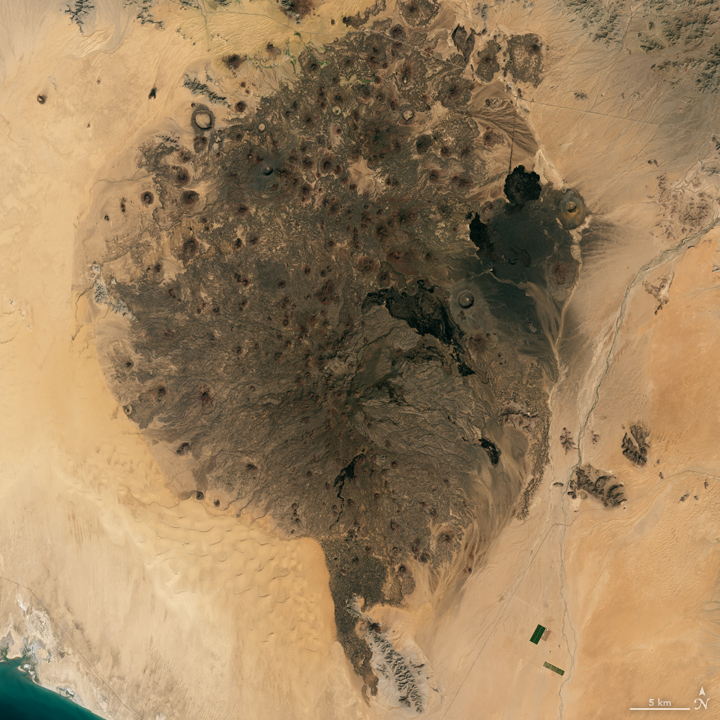 Steady, consistent winds in the area have shifted low-lying sand into dune fields in intriguing regular patterns. These same patterns of sand dune fields appear around the world in desert areas.

The volcanic peaks and cinder cones are believed to have formed from volcanic activity that first started roughly 4 million years ago — most likely due to the plate tectonics that also formed the Gulf of California around the same time. The most recent activity was perhaps 11,000 years ago. During the late 1960s, NASA trained astronauts in field geology at a number of sites around the world, including Pinacate Peaks, as preparation for the lunar landings.

NOTE: In a previous version of this post, I featured the EO-1 ALI image below, and an astute reader pointed out that these peaks, while in the Biosphere Reserve, are not Pinacate Peaks, but rather the Sierra de Rosario range nearby. I am geographically and tectonically embarassed…

The natural color image here is from the now-defunct Earth Observing 1 (EO-1) satellite using its Advanced Land Imager (ALI). The image was acquired on December 16, 2012. This late-year scene was just days before the solstice (the farthest south the Sun appears in the sky), so the tallest sand dunes and the volcanic peaks cast unusually long shadows across the ground.

EO-1 was launched in November 2000 as an engineering testbed for new sensor technology; in particular, the ALI instrument was a predecessor for the Landsat 8 Operational Land Imager. The EO-1 mission was so successful that it was extended past its original 18-month mission, and was only recently retired after 17 years of operation.

This entry was posted on Friday, November 10th, 2017 at 10:00 am and is filed under Uncategorized. You can follow any responses to this entry through the RSS 2.0 feed. Both comments and pings are currently closed.

3 Responses to “What A Wonderful World: Pinacate Peaks”