What A Wonderful World: Miyar Glacier

It takes a certain amount of devotion to reach Miyar Glacier. The glacier sits high in the Indian Himalayas, well away from towns and roads, but it rewards explorers with stunning scenery and mountain peaks that rise above 6,000 meters (20,000 feet).  Many of the peaks have little or no record of previous ascents. Satellites, however, can explore with considerably greater ease. 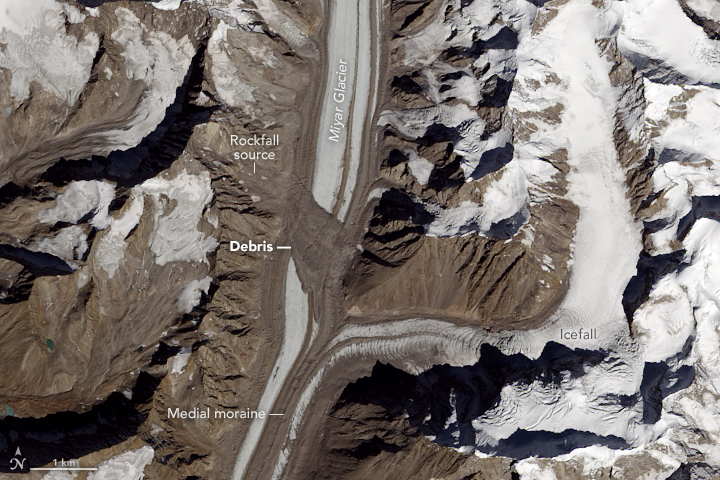 The Operational Land Imager (OLI) on Landsat 8 acquired this image on October 19, 2016. Summer warmth had melted off snow from the previous winter, leaving only the permanent snow and ice cover. Notice the debris field spread across the width of the glacier. The landslide that left it predates this image by some time; we know this because the debris has been carried downstream by the flow of the ice.

A little exploring with the Google Earth Engine timelapse tool shows Landsat 8’s high dynamic range — that is, its ability to discern both dim and bright features. In images prior to 2013, much of the glacier is featureless and white because it was too bright for the older Thematic Mapper (Landsat 5) and Enhanced Thematic Mapper Plus (Landsat 7) instruments to make out details. Images from 2013 onwards, which use the newer OLI data, show more detail. Still, it is fairly clear that there was no landslide feature as recently as 2007, and the slide definitely had taken place by 2010. Indian researchers used other satellite resources to pin the landslide date down to some time in 2009.

The Miyar Glacier has a relatively smooth surface in this image, with long linear streaks through the center of the glacier. These are medial moraines, features that form when two or more glaciers merge. The confluence of the tributary and the glacier shows how new material gets carried in to create medial moraines.

The tributary merging from the east (in the image above) shows choppy features from the confluence all the way upstream. This very rough surface is an icefall, a feature somewhat akin to rapids or a waterfall in a river. The glacier at the bend is roughly 700 meters (2,100 feet) higher than at the Miyar confluence (approximately 5,200 meters and 4,500 meters above sea level respectively). The ice is flowing over a rough and steep rock surface, causing matching rippling in the ice surface. 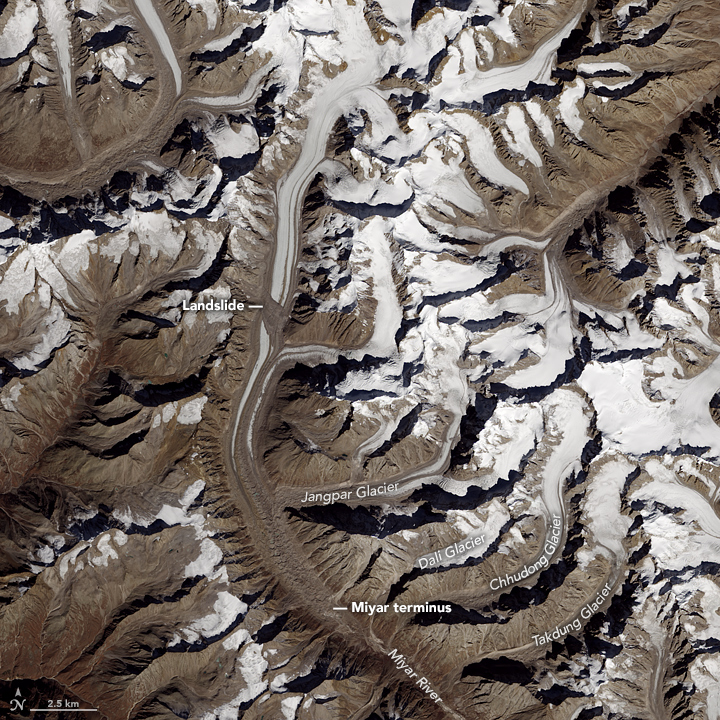 The wider image shows the terminus of the Miyar Glacier as well as a number of other tributary glaciers. The names shown here are based on the American Alpine Journal (2009), which notes that many of these glaciers have different names in trekking journals and maps.

This entry was posted on Tuesday, June 6th, 2017 at 4:33 pm and is filed under Uncategorized. You can follow any responses to this entry through the RSS 2.0 feed. Both comments and pings are currently closed.

One Response to “What A Wonderful World: Miyar Glacier”