On This Date: The Bingham Canyon Landslide 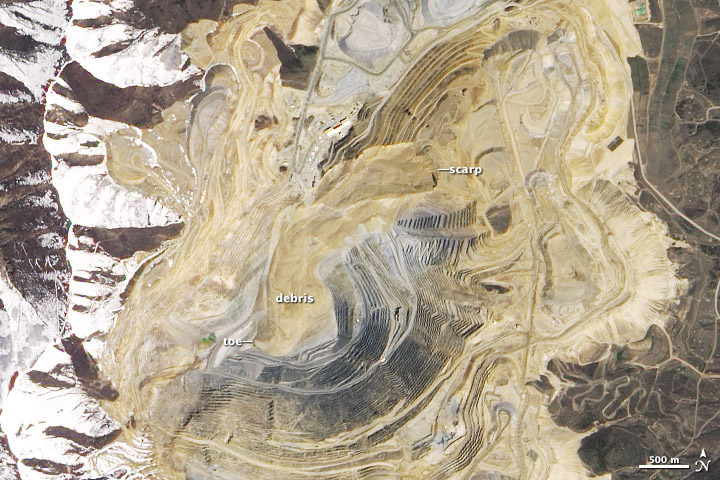 Four years ago today, one of the largest non-volcanic landslides in U.S. history began high on the northern wall of Utah’s Bingham Canyon mine. During two main bursts of activity that day, several million cubic meters of rock and soil careened deep into the mine’s pit.

This was a case where science and the right preparation saved lives. The company that runs the mine had installed an interferometric radar system months before the slide, and it prevented miners from being blindsided. With the radar system in place, mine operators detected changes in the stability of the pit’s walls well before the landslide occurred. When the slope finally gave way, all the workers in the pit had already been evacuated. Not one person was injured.

The image above was acquired by the Advanced Land Imager (ALI) on the Earth Observing-1 satellite on May 2, 2013. For more detailed and recent images of the mine pit, see the montage below. Photos A, B, and C — from Rio Tinto Kennecott — show an overview of the pit, the source area, and slide debris in the immediate aftermath of the event. D is an aerial image from the state government of Utah that shows the mine nine months before the landslide. E is part of the ALI satellite image above. F is a second aerial image taken in February 2014. By then, much of the debris had been removed and a new access road had been built. 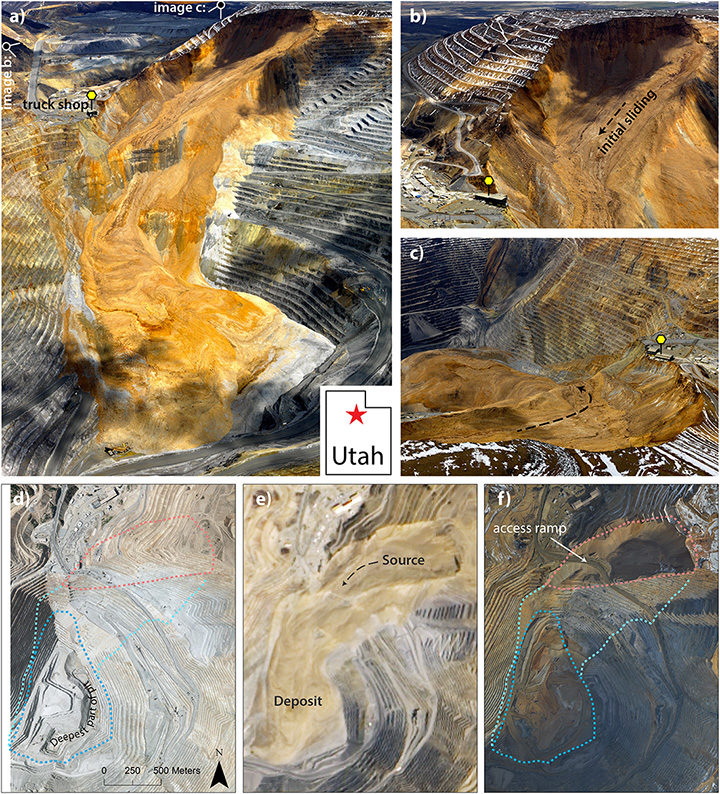 The montage was originally published in March 2017 by the Journal of Geophysical Research as part of a study authored by Jeffrey Moore of Lawrence Livermore National Laboratory. The University of Utah wrote about the research in a recent blog post:

On April 10, at 9:30 p.m. and again at 11:05 p.m., the slope gave way and thundered down into the pit, filling in part of what had been the largest man-made excavation in the world. Later analysis estimated that the landslide was at the time the largest non-volcanic slide in recorded North American history. Now, University of Utah geoscientists have revisited the slide with a combined analysis of aerial photos, computer modeling, and seismic data to pick apart the details. The total volume of rock that fell during the slide was 52 million cubic meters, they report, enough to cover Central Park with 50 feet of rock and dirt. The slide occurred in two main phases, but researchers used infrasound recordings and seismic data to discover 11 additional landslides that occurred between the two main events. Modeling and further seismic analysis revealed the average speeds at which the hillsides fell: 81 miles per hour for the first main slide and 92 mph for the second, with peak speeds well over 150 mph.

The interferometric radar system is not the only safety technology in place at Bingham Canyon. Drones, GPS, and trained experts keep a vigilant eye out for signs of landslides at this mine. Technology and tactics like this  mean landslides cause very few injuries and deaths in the United States even though significant landslide potential exists in many parts of the country. As we recently reported, many other parts of the world (notably Africa and South America) are not nearly so fortunate.

This entry was posted on Monday, April 10th, 2017 at 4:12 pm and is filed under From the Archives, Research News. You can follow any responses to this entry through the RSS 2.0 feed. Both comments and pings are currently closed.