Fires in Indonesia: Perspective from the Ground 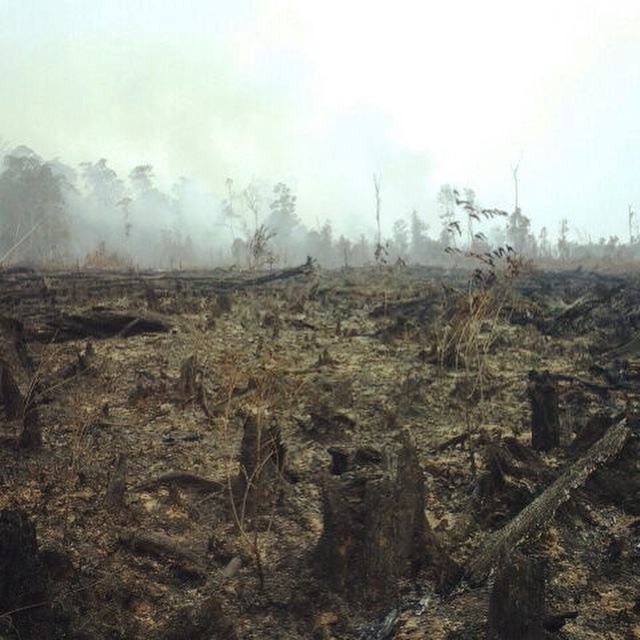 Aftermath of a fire in peatlands on the southwest border of Gunung Palung National Park, West Kalimantan. (Photo courtesy of the Gunung Palung Orangutan Conservation Program).

Cassie Freund is the program director of the Gunung Palung Orangutan Conservation Program, an orangutan protection project in Indonesia. While working on our latest feature story, we asked her what life was like in West Kalimantan during the 2015 fire season, when smoke blanketed parts of Borneo and Sumatra. Peat deposits, El Niño weather, and agricultural activity converged to produce prodigious fires and planet-warming emissions. Read Seeing Through the Smoky Pall: Observations from a Grim Indonesian Fire Season to learn more.

How has the smoke affected you?

I live in the Ketapang district of West Kalimantan. We had some serious fires here, but it wasn’t as bad as in Central Kalimantan, which was basically the epicenter of the disaster. Breathing the smoke wasn’t pleasant, and I didn’t dare open a window or a door in my house because it would just permeate everything.

The smoke also seriously disrupted some of my travel plans. There were no flights into or out of my town for at least a month, so we had to rely on boats or long-distance travel by car.

The smoke also disrupted my work. I do lot in the community and in schools, but September and October were quiet months for us because the schools were not in session. It was too dangerous for students. Adults were not available to participate in our conservation activities and meetings because they either had to stay in the field and guard their crops from fire, or didn’t want to be outside more then necessary.

Have you had health problems as a result of the haze? Do you know people who have?

I had a cough for several weeks. I do know people whose children were sick, and one woman I spoke to has a three-month old baby that she has not taken outside at all because of the smoke. One problem was that there just weren’t enough good masks to go around. During the worst of the pollution, normal surgical masks aren’t enough. But many people don’t own the N95 masks that block out the smoke particles.

Can you describe how the air smelled and tasted during the worst of the burning?

Acrid is the best word to describe it. Peat fires have a pretty distinctive smell. The smoke just goes right to the back of your throat, and makes your eyes sting. People here describe it has having mata pedas, which translates to “spicy eyes.” The smoke looks like morning fog, but it doesn’t dissipate.

Is there anything else you would like to add?

I am afraid that the next huge hot spots—not this year, but maybe in the future—will be in Papua. And there, as someone has pointed out to me, there are no charismatic species to get people riled up and to motivate them to donate to conservation. There’s just peat. Most of the peatlands there are still intact, too, and they absolutely need to be protected.

You can read blog posts by Cassie Freund about the fires here and here.

This entry was posted on Thursday, December 10th, 2015 at 8:59 am and is filed under Ground Photography, News Roundup. You can follow any responses to this entry through the RSS 2.0 feed. Both comments and pings are currently closed.

One Response to “Fires in Indonesia: Perspective from the Ground”