The Earth Observing-1 (EO-1) satellite was orbiting at an altitude of about 700 kilometers (400 miles) when it captured our April 11 Image of the Day  —  a nadir view of Kilauea’s Kahaualeʻa 2 lava flow creeping through forests northeast of Pu’u ’O’o crater. Much closer to the surface, the U.S. Geological Survey monitors the lava flow with helicopter overflights.

The image below shows a portion of the flow as it appeared on March 7, 2014. The smoke near the flow front is caused by lava burning trees and other vegetation in ohia lehua forests. Gases emanating from the vent are visible on the upper left.

For more aerial imagery of Kahaualeʻa 2, visit the Hawaiian Volcano Observatory’s multimedia page. The image below was acquired by satellite on March 11, 2014. Click on it for more details. 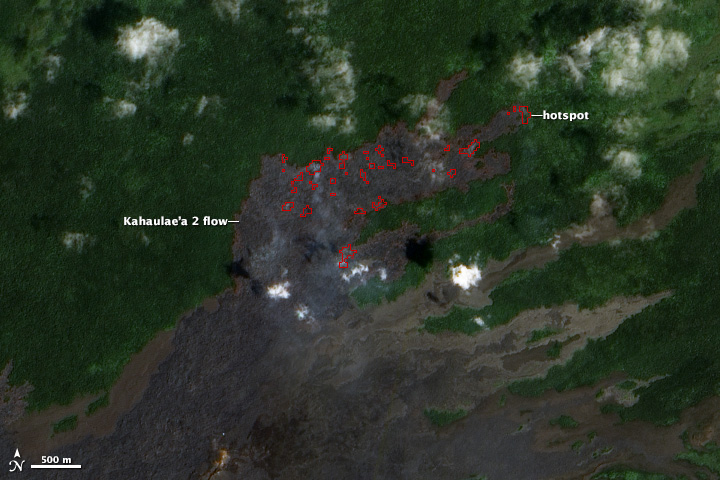 This entry was posted on Friday, April 11th, 2014 at 11:10 am and is filed under Uncategorized. You can follow any responses to this entry through the RSS 2.0 feed. Both comments and pings are currently closed.