Last Day to Vote in Round One of Tournament Earth

I hope your brackets are ready because polls for round one of Tournament Earth close today at 4 p.m EST/9 p.m. UTC. Second round voting will open on Monday at 9 a.m. EST/ 1 p.m. UTC). Also, stay tuned for occasional posts on Earth Matters with details about how images fared in the competition.

The images in the tournament are a blend of reader and staff favorites from the 2013 calendar year. The images are seeded and divided into four brackets categorized by image type: data visualization, photographs, art, and events. The top seed in the data visualization bracket — and the No. 1 seed overall — is a global map of fine particulate pollution that garnered more than 150,000 page views in 2013. The photo section is topped by a nighttime view of Liege, Belgium, as photographed by an astronaut on the International Space Station. The “art” section is led by a satellite image of a rare snowfall in Great Britain. The top seed among natural events is a January 2013 satellite image of a smog and pollution over China — the second most popular image on the Earth Observatory last year. Six of the seven most-viewed images on the site are battling in the events section. Good luck with your bracket!

Create and print your bracket at
http://earthobservatory.nasa.gov/TournamentEarth/grid_interactive.php 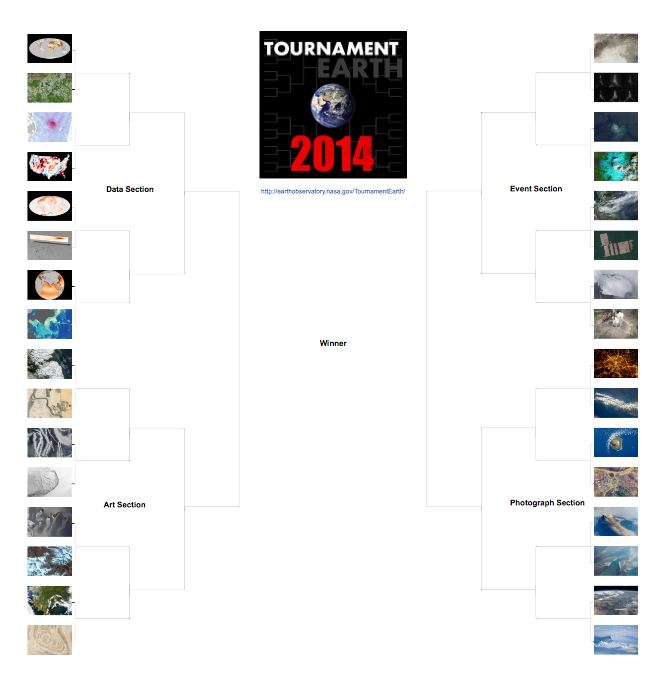 This entry was posted on Friday, March 7th, 2014 at 10:09 am and is filed under NASA News, Tournament Earth. You can follow any responses to this entry through the RSS 2.0 feed. Both comments and pings are currently closed.