“I recall that starting on May 15, 2013, the cold did not leave [New York]. In fact, it still felt like winter because it refused to warm up. Then came June 2013, with the sky overcast each and every day, with the humidity very high, hardly any sun except for an occasional peeping through. In fact as of June 30, 2013, there was no summer as summer used to be. The weather pattern was such that I had never seen anything like it. Do you know why?”

We asked Gavin Schmidt, deputy chief of NASA’s Goddard Institute for Space Studies (GISS) and a NYC resident, what he thought:

“The seasonal weather pattern in any particular location is very sensitive to the chaotic dynamics in the atmosphere. Our ability to attribute those changes to either ocean temperature patterns or external drivers is quite limited, and so we can’t provide an answer that can satisfactorily address this question. Things that we can say are caused (statistically) are generally on larger spatial scales and longer time scales.”

In recent years, many readers have asked Earth Observatory if a particular spell of crazy weather is a result of global warming. As Gavin pointed out and many others have explained, weather events and climate are different things. Climate is what you expect to happen, and weather is what actually happens on a  day-to-day, week-to-week time scale. There is inherent chaos and unpredictable variability in weather. Climate, on the other hand, is a matter of trends and long views. What might the season or year look like when compared to the averages of many years?  Is it getting warmer or cooler, wetter or drier? Can that be explained by some physical process?

Above: temperature anomalies for June 2013, as calculated by NASA GISS

There were heat waves, cool spells, and weird weather long before anyone spoke of global warming. And global warming and climate change are not linear, everywhere-the-same patterns. But there is growing evidence that weather extremes are becoming more extreme, the unusual is becoming more usual — and global climate change is a key reason. The Intergovernmental Panel on Climate Change recently published a report on climate extremes, which is also summarized well by Climate Central.

As we explained in a feature story earlier this spring, the behavior of storms is growing more erratic. Other research has shown that heat waves have become more frequent and more likely to break records. This video below shows how the number of deviations from normal — the number of extreme heating or cooling events — has shifted toward more extreme highs and fewer lows.

While Manny and other New Yorkers had an unorthodox June, much of the rest of the United States and the world baked. According the NOAA National Climatic Data Center and meteorologist-blogger Jeff Masters of  Weather Underground, June 2013 was the fifth warmest June on record. July 2013 also was shaping up to be quite hot just about everywhere.

Comedian Stephen Wright has a one-liner that he used to deploy in his stand-up routines: “Every so often, I like to stick my head out of the window, look up, and smile for a satellite picture.”  This weekend, the entire planet is being encouraged to take that chance at least twice. The Cassini spacecraft — launched in 1997 and still sending back images from Saturn — and Messenger — in orbit around Mercury — will look back at Earth for long-distance snapshots of home. Here are some details from NASA news releases.

From the Jet Propulsion Laboratory: “The image taken from the Saturn system by NASA’s Cassini spacecraft will occur between 2:27 and 2:42 Pacific Daylight Time (5:27 and 5:42 p.m. EDT, or 21:27 and 21:47 UTC) on Friday, July 19. Cassini will be nearly 900 million miles (nearly 1.5 billion kilometers) away from Earth…The Cassini Earth portrait is part of a more extensive mosaic — or multi-image picture — of the Saturn system as it is backlit by the Sun. The viewing geometry highlights the tiniest of ring particles and will allow scientists to see patterns within Saturn’s dusty rings. Processing of the Earth images is expected to take a few days, and processing of the full Saturn system mosaic will likely take several weeks.”

Cassini also collected this image (below) of Earth and Saturn in 2006. For details on how to find Saturn in the sky and participate in this weekend’s event, visit: http://saturn.jpl.nasa.gov/waveatsaturn

From the Johns Hopkins Applied Physics Laboratory: “NASA’s Mercury-orbiting MESSENGER spacecraft will capture images of Earth on July 19 and 20. The images will be taken at 7:49 a.m., 8:38 a.m. and 9:41 a.m. Eastern Daylight Time on both days. Nearly half of the Earth, including all the Americas, Africa, and Europe, will be illuminated and facing MESSENGER, according to Hari Nair, the  planetary scientist who designed and is implementing the campaign. The images on the second day will also include pictures of the Moon, where all six of the Apollo landing sites will be illuminated, 44 years to the day after Apollo 11 landed on the Moon’s rocky surface. These images of Earth and the Moon are coincidental, taken as part of a search for natural satellites around Mercury.”

For more of the MESSENGER story, visit: http://messenger.jhuapl.edu/news_room/details.php?id=242

We hope to post both views on Earth Observatory in the coming weeks. 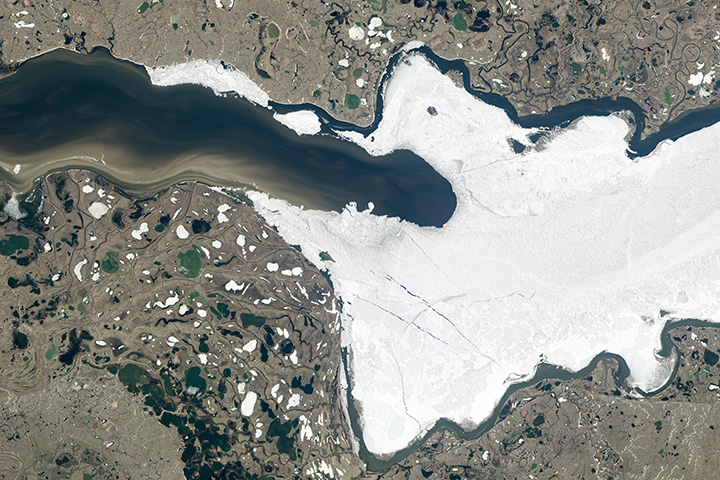 Each month, Earth Observatory offers up a puzzling satellite image here on Earth Matters. The eighteenth puzzler is above. Your challenge is to use the comments section to tell us what part of the world we are looking at, when the image was acquired, and why the scene is interesting.

How to answer. Your answer can be a few words or several paragraphs. (Try to keep it shorter than 300 words). You might simply tell us what part of the world an image shows. Or you can dig deeper and explain what satellite and instrument produced the image, what spectral bands were used to create it, or what is compelling about some obscure speck in the far corner of an image. If you think something is interesting or noteworthy, tell us about it.

The prize. We can’t offer prize money for being the first to respond or for digging up the most interesting kernels of information. But, we can promise you credit and glory (well, maybe just credit). Roughly one week after a puzzler image appears on this blog, we will post an annotated and captioned version as our Image of the Day. In the credits, we’ll acknowledge the person who was first to correctly ID the image. We’ll also recognize people who offer the most interesting tidbits of information. Please include your preferred name or alias with your comment. If you work for an institution that you want us to recognize, please mention that as well.

Recent winners. If you’ve won the puzzler in the last few months, please sit on your hands for at least a few days to give others a chance to play.

The following is an excerpt from a story by Alan Buis, NASA’s Jet Propulsion Laboratory…

The curtain has come down on a superstar of satellite oceanography that played the “Great Blue Way” of the world’s ocean for 11.5 years. The joint NASA and Centre National d’Etudes Spatiales (CNES) Jason-1 ocean altimetry satellite was decommissioned on July 3, 2013, following the loss of its last remaining transmitter.

Launched December 7, 2001, and designed to last three to five years, Jason-1 helped create a revolutionary 20-plus-year climate data record of global ocean surface topography that began in 1992 with the launch of the NASA/CNES Topex/Poseidon satellite. For more than 53,500 orbits of our planet, Jason-1 precisely mapped sea level, wind speed, and wave height for more than 95 percent of Earth’s ice-free ocean every 10 days. The mission provided new insights into ocean circulation, tracked our rising seas, and enabled more accurate weather, ocean, and climate forecasts.

“Jason-1 has been a resounding scientific, technical and international success,” said John Grunsfeld, associate administrator of NASA’s Science Mission Directorate in Washington. “Since launch, it has charted nearly 1.6 inches (4 centimeters) of rise in global sea levels, a critical measure of climate change and a direct result of global warming. The Jason satellite series provides the most accurate measure of this impact, which is felt all over the globe.”

During parts of its mission, Jason-1 flew in carefully coordinated orbits with both its predecessor Topex/Poseidon and its successor, the Ocean Surface Topography Mission/Jason-2 (launched in 2008). These coordinated orbit periods, which lasted about three years each, cross-calibrated the satellites, making possible a 20-plus-year unbroken climate record of sea level change. These coordination periods also doubled data coverage.

Combined with data from the European Space Agency’s Envisat mission, these data allow scientists to study smaller-scale ocean circulation phenomena, such as coastal tides, ocean eddies, currents, and fronts. These small-scale features are thought to be responsible for transporting and mixing heat and other properties–such as nutrients and dissolved carbon dioxide–within the ocean.

Contact was lost with the Jason-1 satellite on June 21 when it was out of visibility of ground stations. At the time of the last contact, Jason-1 and its instruments were healthy, with no indications of any alarms or anomalies. Subsequent attempts to re-establish spacecraft communications from U.S. and French ground stations were unsuccessful. Extensive engineering operations undertaken to recover downlink communications also were unsuccessful.

After consultation with the spacecraft and transmitter manufacturers, it was determined a non-recoverable failure with the last remaining transmitter on Jason-1 was the cause of the loss of contact. The spacecraft’s other transmitter experienced a permanent failure in September 2005. There now is no remaining capability to retrieve data from the Jason-1 spacecraft.

On July 1, mission controllers commanded Jason-1 into a safe hold state that reinitialized the satellite. After making several more unsuccessful attempts to locate a signal, mission managers at CNES and NASA decided to proceed with decommissioning Jason-1. The satellite was then commanded to turn off its magnetometer and reaction wheels. Without these attitude control systems, Jason-1 and its solar panels will slowly drift away from pointing at the sun and its batteries will discharge, leaving it totally inert within the next 90 days. The spacecraft will not reenter Earth’s atmosphere for at least 1,000 years.

“Like its predecessor Topex/Poseidon, Jason-1 provided one of the most comprehensive pictures of changes in the tropical Pacific Ocean, including the comings and goings of El Nino and La Nina events,” said Lee-Lueng Fu, Jason-1 project scientist at NASA’s Jet Propulsion Laboratory. “These Pacific Ocean climate cycles are responsible for major shifts in sea level, ocean temperatures and rainfall every two to five years and can sometimes be so large that worldwide weather patterns are affected. Jason-1 data have been instrumental in monitoring and predicting these ever-changing cycles.”