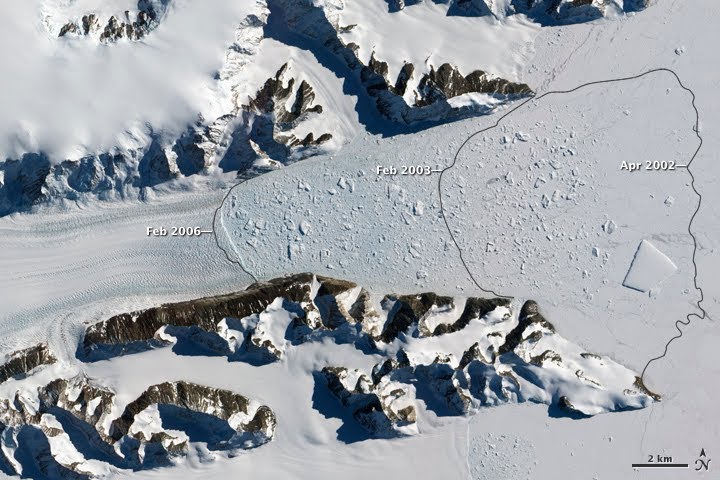 On October 25, 2012, we published a set of images that shows how the Hektoria and Green glaciers on the Antarctic Peninsula have continued thinning since the Larsen-B ice shelf’s collapse in 2002.  Though those two glaciers have been some of the fastest changing in recent years, they aren’t the only Larsen-B tributary glaciers that have lost ice over the last decade.

In all, the 15 glaciers that flow into the ice shelf have lost more than 10 gigatons (one gigaton equals one billion tons) of mass per year, according to research published in the Journal of Glaciology. Some of the most dramatic changes have occurred at Crane, the longest of the Larsen B tributary glaciers. Since the collapse of the ice shelf, Crane Glacier has retreated by more than 12 kilometers (7 miles).

This visualization, based on an image captured by the Advanced Land Imager (ALI) instrument on the Earth Observing-1 (EO-1) satellite, shows the location of the terminus in April 2002, February 2003, and February 2006. Since 2006, the terminus has stayed in the same general position. The image was acquired on February 24, 2012.  For another view of Crane glacier’s retreating terminus, please see this image.

This entry was posted on Friday, November 2nd, 2012 at 10:20 am and is filed under Uncategorized. You can follow any responses to this entry through the RSS 2.0 feed. Both comments and pings are currently closed.