On September 16, 2012, the extent of sea ice in the Arctic Ocean dropped to 3.41 million square kilometers (1.32 million square miles). The National Snow and Ice Data Center (NSIDC) issued a preliminary announcement on September 19 noting that it was likely the minimum extent for the year and the lowest extent observed in the 33-year satellite record. 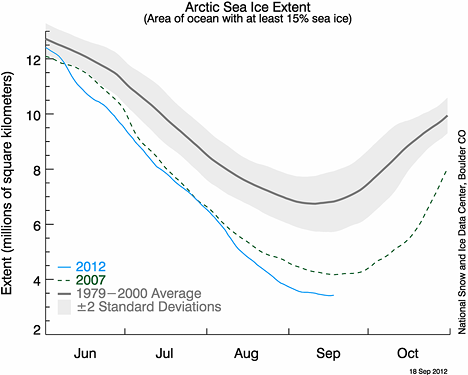 Arctic sea ice typically reaches is minimum extent in mid-September, then begins increasing through the Northern Hemisphere fall and winter. The maximum extent usually occurs in March. Since the last maximum on March 20, 2012, the Arctic has lost a total of 11.83 million square kilometers (4.57 million square miles) of sea ice.

NSIDC uses a five-day running average for sea ice extent, and calculations of sea ice extent have been refined from those of previous years. For more information on Arctic sea ice in 2012, visit NSIDC’s Arctic Sea Ice News and Analysis blog and the NASA news release on the observation. To learn more about sea ice basics, see the sea ice fact sheet.

This entry was posted on Wednesday, September 19th, 2012 at 1:25 pm and is filed under Earth Indicator. You can follow any responses to this entry through the RSS 2.0 feed. Both comments and pings are currently closed.