Paleozoic, Mesozoic, and Cenozoic. These are the major eras in the history of life on Earth, and the transition from one period to another has been marked by a major turnover in fossils — one assemblage of organisms going extinct and being replaced by another.

Today paleontologists agree that the biggest extinction in the fossil record occurred at the transition between the Paleozoic and Mesozoic, about 250 million years ago. During this Permo-Triassic extinction, perhaps as much as 70 percent of the plant, reptilian, amphibian, and insect species died on land. In the ocean, the consequences were even more devastating; up to 96 percent of Earth’s marine species went extinct.

The cause of such a catastrophic loss of life has been the subject of ongoing study. One proposed explanation is an asteroid strike like the one blamed for dinosaur extinction 65 million years ago. Another explanation involves the oxygen level in the ocean. Marine organisms need oxygen just as terrestrial organisms do, and some scientists have speculated that oxygen-poor water welled up from the ocean depths and suffocated marine life. Another hypothesis is large-scale volcanism. Studies published in November 2011 and May 2012 argue that volcanism does the best job of explaining all the evidence in the geologic record. And it not only explains the ancient mass extinction, but also hints at future threats to ocean life.

The volcanic hypothesis centers around the Siberian Traps, flat-topped volcanic mountains in Russia. The massive eruption that produced these mountains occurred 250 million years ago, about the same time as the Permo-Triassic extinction. The eruption was one of the biggest volcanic events in the last 500 million years, and it matches up with not only the timing of the extinction, but with the kinds of animals that were hit hardest.

Volcanoes release carbon dioxide, and the Siberian Traps eruptions would have emitted huge quantities of it, while also producing it indirectly. The basalts released by the eruptions flowed over sedimentary rock rich in organic material. Geologic studies of the Siberian Traps have revealed gas explosion structures along the margins of the flood basalts, which geologists have interpreted as evidence of sudden, violent carbon releases from sedimentary rocks under pressure by lava.

Besides raising atmospheric temperatures with heat-trapping gas, the newly released carbon dioxide would also have affected the ocean. Carbon dioxide dissolves in seawater to create carbonic acid, increasing ocean acidity. The carbonic acid reacts with carbonate ions, leaving less carbonate for marine life to use for shells or skeletons. Animals with such shells or skeletons suffer, but they don’t all suffer equally. Mollusks and marine arthropods have what biologists refer to as “buffered physiology,” which means they have closed circulation systems and/or gas-exchanging features (such as gills) to buffer their internal tissues from changes in ocean chemistry. Other animals such as sponges, corals, sea urchins, and sea lilies do not; their tissues are directly exposed to seawater. What the Permo-Triassic extinction studies found was that the poorly buffered organisms experienced greater rates of extinction and took longer to rebound. 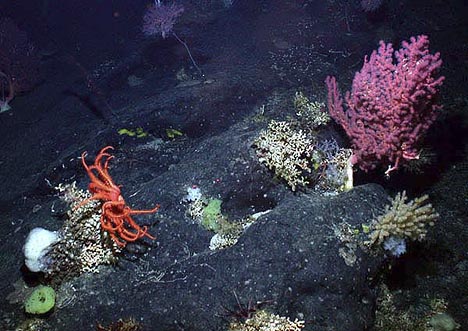 Carbon dioxide alone did not cause the catastrophic extinction 250 million years ago. Other factors, including higher temperatures and lower oxygen levels in the water, also pressured marine life. But carbon dioxide likely played an outsized role.

No one can predict when volcanic activity as widespread and destructive and the Siberian Traps eruptions might occur again. But we do know that rising carbon dioxide levels in the atmosphere pose a threat to marine life today. While volcanoes currently release 130 to 380 million metric tons of carbon dioxide each year, human burning of fossil fuels releases about 30 billion tons of it. That’s anywhere from 100 to 300 times as much greenhouse gas that can increase ocean acidity.

Today’s ocean contains a sizable reservoir of fine-grained calcium carbonate sediment that acts as a counterweight to rising ocean acidity. Geologists surmise that such a reservoir probably didn’t exist in the Permo-Triassic ocean. Moreover, today’s marine organisms descended from the survivors of high acidity episodes over the last 250 million years, so they may be better able to withstand ocean chemistry changes. Nevertheless, rising ocean acidity could spell trouble for marine organisms such as corals. A 2011 study of volcanic carbon dioxide seeps in Papua New Guinea found that ocean acidification and temperature stress reduced coral diversity and abundance. As before, poorly buffered marine life could suffer.

For more information on carbon dioxide and ocean acidification, please see the Earth Observatory features The Carbon Cycle and The Ocean’s Carbon Balance.

This entry was posted on Wednesday, May 30th, 2012 at 9:46 pm and is filed under Uncategorized. You can follow any responses to this entry through the RSS 2.0 feed. Both comments and pings are currently closed.