Out of Sight, But Not Out of Mind

One thing we occasionally hear from readers is “Why don’t you have images of…?”  We actually get some really fantastic ideas just that way. For instance, just a few weeks ago, we got a request for satellite imagery of the slide at Medvezhiy Glacier in Tajikistan courtesy of a reader’s letter.

However, sometimes we don’t cover an event because we cannot see it. Take, for instance, the recent tornado in Blagoveshchensk, a city on the Amur River in eastern Russia, near the border with China. The rare tornado was initially reported as a super-powerful EF4 or EF5 strength storm.  NASA sensors, such as the Advanced Land Imager (ALI), have been used to observe storm damage from comparable storms: see the April 2011 ALI imagery of Tuscaloosa, Alabama, for example.

It turned out that the initial reports of tornado strength in Blagoveshchensk were probably a bit off, though that wasn’t much consolation to the people in harm’s way. (Tornadoes are extraordinarily rare in all of Russia, and none had that struck Blagoveshchensk in recorded history. ) The tornado was certainly not a minor storm: at least one person was dead and 30 were injured, according to news sources. Damage from the storm was estimated to be worth as much as US$2.9 million.  But it was probably not the same kind of super-strong storm as the Tuscaloosa event. 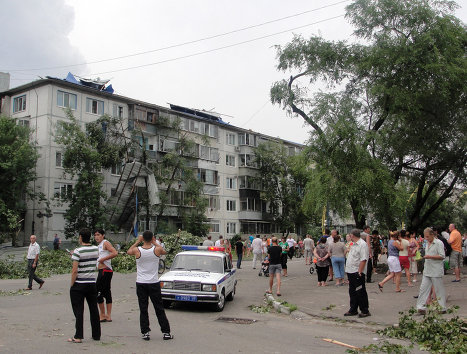 How do we know? In this ground-based photo, you can see damaged trees, roof sections torn off, and the covered balconies ripped off the sides of the apartment building.  But this was not the kind of total demolition seen in super-powerful tornadoes like those that struck the U.S. in April 2011. As shown in the image below, the tornado did not leave a wide swath of damage across Blagoveshchensk.

The ALI instrument cannot see anything smaller than 10 meters, so the storm track just doesn’t show up. Sometimes we don’t see things in satellite images because they are just too small to be viewed that way.  Some commercial satellites, which have resolutions as tight as 50 centimeters, might show storm damage. But research satellites are not designed to look for features that small.

Credit: Top photograph is from the Ministry of Emergency Responses, via the RIA Novosti site. The satellite image was created by Jesse Allen, using EO-1 ALI data provided courtesy of the NASA EO-1 team.

This entry was posted on Monday, August 15th, 2011 at 5:11 pm and is filed under Uncategorized. You can follow any responses to this entry through the RSS 2.0 feed. Both comments and pings are currently closed.